Well-developed hull split of the Padre. 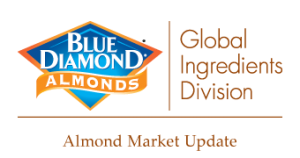 Global markets show strong growth across multiple regions. The U.S. market continues to rebound, up 19% in October and 14% YTD.   Some switching into almonds from higher priced cashews is occurring for mixed nut producers.  Shipments to China & Vietnam are twice what they were last year. India is tracking up 64%.  EU shipments are up 20%, aided in some part by the smaller than expected Spanish crop. Finally, the Middle East and Africa regions finished the first quarter up 125%.

Combined shipments and commitments are 36% higher the last year, and 10% higher than the record levels through October on 2013 Crop.