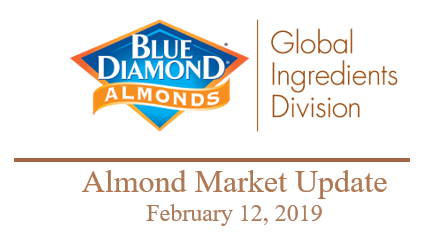 For another month, the Almond Board Position report largely met expectations in California.  2018 receipts to date stand at 2.251 billion pounds compared to 2.242 billion lbs through January last year. The 2018 crop continues to look very similar in size to the 2017 crop, falling short of 2.3 billion lbs. Given a smaller carry-in than last year, total supply is 30-40 million lbs less than last year.

The 209 million lbs of January shipments narrowed the gap between 2017 & 2018 crop shipments. With monthly shipments 8% higher than last January, YTD shipments are now within 1% of last year. U.S. shipments continue to grow faster than last year, up by 3.5% year over year. After a slower early start due to tariff and trade issued primarily impacting China and Turkey, record export shipments have closed YTD volumes to within 3% of last year. January new commitments of 179 million lbs continue to build the foundation for consistent shipments through the next few months.

U.S. shipments of California almonds YTD are up 13 million lbs or 3.5%. The Middle East is now up 7 million lbs and 7% YTD, offsetting the declines of imports to Turkey. Shipments to China are down by 10% or ~16 million lbs, impacted by trade disputes and threatened tariffs. The EU market has imported 7% less (22 million lbs). Collectively, shipments that are roughly the same as last year reflect strong global demand when not impacted by trade barriers.

Price differentials between Nonpareil and pollinizer varieties continue to be at historical lows for recent years.  The impact of trade uncertainty and tariff issues put early downward pressure on Nonpareil prices. Pollinizer prices reflect a tighter supply & demand balance, with increased pollinizer pricing coming much earlier this year than last. 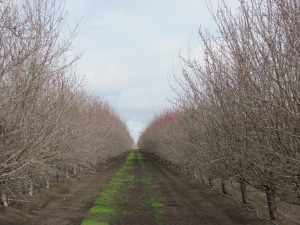 Early bloom progression has slowed to a crawl as cooler temperatures have inhibited bud development. Only trace amounts of open flowers are present in most orchards throughout the state, while the progression of petal tissue emerging from the green buds has slowed immensely in the last few days. The late blooming Butte and Padre are starting to break dormancy as green tissue is beginning to emerge from the buds. Cool temperatures and rain dominated the early part of February and most of the almond growing regions stayed below 60 degrees while multiple storm fronts moved throughout the state.