This report covers conditions and observations made between Monday, August 5 and Sunday September 1, 2013. The next report is scheduled for Monday, September 30, 2013. However, in the event of any significant occurrences prior to that date, this site will be updated as soon as possible.

This report’s photos for the northern region present three views of the 2013 harvest; first an over-the-top shot of a harvester and shuttle cart moving through an orchard in the Williams area of Colusa County, followed by a side view of the crop being picked up and a truck being loaded from a shuttle in the Durham area of Butte County.

Comparatively mild temperatures prevailed in the Sacramento Valley during August, providing growers with comfortable conditions for the 2013 harvest. Daily maximum temperatures were widely reported in the mid and upper 80’s as the period began, then rose into the low to mid 90’s in the majority of the region at mid-month, with warmest locations reaching to just over the 100 degree mark. Temperatures then settled back into the upper 80’s and lower 90’s for the balance of the period. Morning lows were reported in the mid 50’s to lower 60’s for the vast majority of the period, with readings dropping only into the upper 60’s on the warmest days between the 18th and 20th of August.

Harvest operations in the northern region began with a seemingly shotgun start during the first week of the period, as growers throughout the region sent shakers into their orchards. Observers are reporting that the Nonpareil is shaking very cleanly and that growers are moving through their orchards in quick fashion. Observers in the southern areas of the region are noting that elevated humidity levels have slowed the drying process slightly, leaving the hulls a little “leathery”. As a result, growers there are leaving the crop in the fields a few days longer to allow for additional drying time. Quality of the crop harvested thus far has been reported as very good, with low reject levels observed. As predicted, kernel sizes are running towards the smaller end of the spectrum.

Observers are reporting that the various pollenizer varieties are maturing at an accelerated pace, inspiring growers to push the Nonpareil harvest as quickly as possible. Growers are applying the smallest amount of water possible prior to shaking the next variety in an effort to prevent moisture stress while still allowing them to begin shaking in a timely manner.  Fortunately, other than the previously noted elevated humidity levels, weather conditions during the period have largely supported these efforts and growers have been rapidly directing harvested product into huller/shellers or to stockpile storage for shelling when the capacity becomes available.

Pressure from web-spinning mites has remained low during the growing season and growers have noted few difficulties during the harvest period as well.  As growers complete the harvest of individual plantings, critical post season irrigations will be completed and crews will be directed to the orchards to begin pruning and other required post-harvest activities. 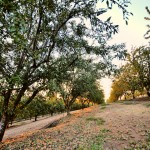 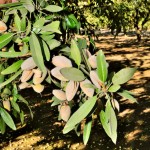 Taken in Stanislaus County, our photos for the central region present the Nonpareil drying under the trees in a foothill orchard at sunrise east of Hickman and a sweeper preparing the crop for the harvest south of Modesto. Our final image shows an example of the rapidly maturing Carmel dropping from the trees prior to shaking, also near Modesto.

Mild to comfortably warm conditions dominated the central region’s weather during August. Daily maximum temperatures rose from low to mid 80’s at the start of the period, peaking at or near the 100 degree mark at mid-month before settling back into the low to mid 90’s during the latter half of the period. Morning lows followed the same pattern, rising from the lower 50’s as the period began into the mid and upper 60’s during the period’s warmest days before dipping back into the upper 50’s for the balance of the month. Monsoonal moisture flowing northward exerted varying degrees of influence throughout the month, building into thunderstorms that rattled windows and dropped trace amounts of rain in the Merced and eastern Stanislaus County areas at mid-month.

Harvest operations began in earnest in the central region during the period and are running at a fever pitch as this report is being written. Growers have been moving rapidly through the Nonpareil variety and have already begun shaking pollenizer varieties, including the Butte and Padre. Observers are reporting that the nuts are coming off of the trees quite easily, with very few remaining after shaking. In spite of the fears of elevated damage levels from Navel Orange Worm that prevailed during the growing season, quality of the nuts received thus far is running quite high, with very low reject levels observed. Growers are reporting that kernels sizes are running towards the smaller end of the spectrum, as was forecast prior to harvest.

Following three years of delayed harvests, especially in 2010 and 2011, the 2013 Nonpareil harvest began on a more normal time frame. Observers are reporting that the various pollenizer varieties are maturing at a particularly accelerated pace, compressing the harvest for most of the region’s growers. This is best demonstrated in the third image accompanying this report, which provides and example of a Carmel planting where the nuts are dropping from the trees prior to splitting. The early maturing pollenizers are complicating the harvest for many of the region’s growers, who normally provide their orchards with an irrigation following the Nonpareil harvest, prior to shaking the next variety. While those with drip irrigation systems are able to provide their trees with some water during the harvest, others must wait until the Nonpareil has been removed from the orchard. Those with the greatest number of nuts on the ground are diverting from the normal practice and are opting to immediately shake their pollenizer and irrigate after they have completed the harvest. The situation is further complicated by the relatively dry soil conditions evident in many orchards. Observers also note that growers with advanced examples of the Monterey along the west side of the region are expecting to begin shaking within the first few days of September and that even the last-to-harvest Fritz is splitting well and is progressing at an accelerated pace.

Growers are delivering their harvested crops directly to huller/sheller facilities and to stockpile storage for shelling later in the season. Huller/sheller operators are reporting that the product delivered to their facilities is running very smoothly and that they are moving swiftly through the crop. As growers complete their harvest in the coming weeks, growers will be providing their orchards with critical post-harvest irrigations. Stress levels in orchards around the region are increasing. This is most evident in plantings along the west side of the region.

This report’s photos for the southern region show a sweeper preparing the crop for harvest near Madera, a shuttle cart and elevator building a stockpile near Chowchilla and a stockpile being built near McFarland in Kern County.

Warm, but relatively mild temperatures, punctuated with elevated humidity levels dominated the southern San Joaquin Valley’s weather during August. Daily maximum temperatures ranged from the mid and upper 80’s at the start of the period, then increased daily to peak near or slightly over the 100 degree mark on the 18th through the 20th of the month. Readings then drifted back into the upper 80’s to mid and upper 90’s for the balance of the period. Morning lows followed a similar pattern, with readings rising from the upper 50’s as the period began to the upper 60’s and lower 70’s during the period’s warmest days before settling back into the upper 50’s to mid 60’s for the remainder of the month.  Flows of monsoonal moisture moving northward from Mexico continued to sweep over the region during the period. While only providing elevated humidity levels and patchy clouds on most days, thunderstorms built over the region at mid-month, creating brief, but strong winds in excess of 30 mph and impressive lightning, but only isolated rain. Growers in the Madera and Kerman areas reported receiving as much as ½ inch of rain in isolated downpours that dried within a few days, providing little hindrance to the pace of the harvest.

Harvest operations in the southern San Joaquin are progressing rapidly as growers work to bring in the 2013 crop. Many in the region have already completed shaking, sweeping and picking up their Nonpareil and have moved on to the various pollenizers. While the Sonora, and Price varieties normally follow the Nonpareil quite closely, observers are reporting that all varieties are maturing at an accelerated pace this year. As a result, growers have already shaken Camel, several of the various California type varieties as well as Butte, Padre and even the relatively late-harvesting Monterey. Deliveries of field-run Nonpareil to huller/shellers have already slowed in the Kern and Tulare County areas while the pace of loads of Butte and Padre is increasing rapidly. Observers are reporting that the first deliveries of field-run Monterey should make their appearance during the first week of September. Indeed, some have noted that the only factor limiting the pace of the harvest has been the amount of equipment available to put in the fields.

As previously noted, thunderstorms at mid-month were accompanied by fairly strong winds. Observers have reported that the greatest impact of the winds were sustained in the Madera County area where the accelerated maturity levels of the pollenizers allowed the winds to knock nuts to the ground, increasing the potential for mixed varieties in the harvested product from the most severely impacted plantings.

Observers are reporting that in spite of the relatively mild conditions, stress levels visible in the region’s orchards are increasing. Low soil moisture levels deep in the root profile, combined with pressure from web-spinning mites and increasing salinity levels have increased the amount of stress in many plantings around the region. Growers will be working to provide an all-important irrigation following the completion of the harvest in order to enter the dormant period in the best possible condition.