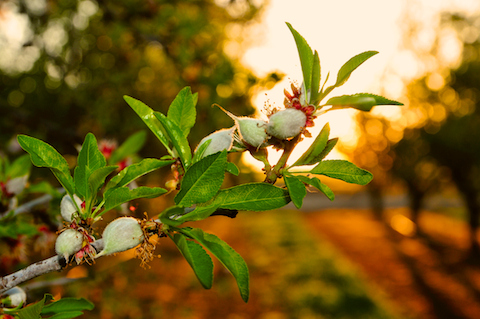 The almond growing region experienced a wide range of weather conditions during the period, with rain early in the week quickly drying as strong north winds blew through the region. Rainfall totals from a storm that passed through the region on Monday, the 10th ranged from a few hundredths to as much as 0.75 inch, with greatest amounts reported in the region’s northern areas.

Morning lows remained at safe levels, ranging predominately between the lower 40’s and lower 50’s, with readings on Saturday, the 15th dipping into the upper 30’s. Daily maximum temperatures rose during the period, increasing from the mid 60’s on the 7th and 8th to the mid and upper 70’s as the period concluded.

The overall pleasant weather conditions have provided good support for the developing crop. Almonds of all varieties are now well into the differentiation process and are growing well, under the influence of the warm temperatures. Larger almonds are also breaking free from their protective jacket, while smaller sizes are withering and falling to the ground.

Non-infectious Bud Failure in the Carmel variety is quite pronounced this year. This genetic disorder is endemic in the Carmel, but can also be occasionally observed in older Nonpareil plantings as well.

Observers have noted that the weakness reported in the Nonpareil bloom has resulted in a comparatively weaker crop set. Given last year’s outstanding Nonpareil production, this is not unexpected. Observers are reporting that the nuts of the Sonora are particularly well developed for this point in time, owing to their early bloom timing and the good growing conditions.

Well-timed treatments for fungal diseases, combined with the drying winds have translated into very low evidence of disease in the region’s orchards. While definitely a nuisance, one benefit of the winds is that they scrub the split jackets from the trees, removing a potential source of fungal infection and thereby reducing the incidence of infection on the leaves and nuts. The winds have also helped to dry the orchard soils, allowing growers to send machinery into the fields to complete work needed for the period. Growers are sending fertilizer spreaders through the orchards as they work to support their crop and tractors can be found pulling mowers through the orchards to reduce the vegetation that has grown tall under the influence of the warm temperatures. Controlling the vegetation growing in the orchard “middles” is an important task at this time of year as a clean, smooth orchard floor is capable of absorbing heat during the day and radiating it back out during the night, helping to maintain temperatures above damaging levels during frost events. Weed control is a particularly important task this year, given the drought conditions. Growers normally allow native plants to grow in the “middles” to hold down dust levels and serve as a nursery site for beneficial insects, mowing occasionally to reduce excessive growth. However, this year’s drought has growers evaluating all possible points of water consumption, leading some to consider eliminating weed growth entirely.

Observers are reporting that the orchards in the central growing region are in good condition, with only traces of the fungal disease, Shot Hole visible in a few plantings. Some growers in San Joaquin County have reported damaging infestation levels of Oblique Banded Leaf Rollers feeding on the developing nuts and have treated accordingly. This potentially serious pest feeds on the small nutlets of all varieties, but can be particularly damaging in tightly clustered varieties such as Avalon, Butte and Carmel. Some have also noted that the expression of Non-Infectious Bud Failure in the Carmel variety is particularly evident this year, with more orchards expressing the disorder for the first time. This genetic disorder is endemic in the Carmel and is not transmissible between trees.

Water continues to be the main topic of discussion by all in the region. Local irrigation districts drawing their supplies directly from Sierra Nevada reservoirs are still formulating their plans for the year and are expected to announce the start of their delivery season within the next few days. Several delayed the start of their deliveries as a result of the rain received during the bloom. At this point in time, growers in the South San Joaquin Irrigation District, which serves growers in the Escalon, Ripon and Manteca area of San Joaquin County, are expecting full allocations for the 2013 season. However, growers in all other districts are facing severe cutbacks in the amount of water they will receive. Those along the I-5 corridor on the west side of the region will receive no water from the Federal or State Water Projects and must rely on alternative sources, where available. Most with water available from private wells have refrained from drawing on their personal supplies. However, rising temperatures forecast for the next week will increase pressure to begin the irrigation season.