High, thin clouds added a beautiful accent to the generally clear skies over the weekend, providing good support for Sacramento Valley’s bloom. Morning low temperatures were widely reported in the low to mid 40’s, with coldest locations dropping briefly into the upper 30’s. Temperatures warmed quickly each day, rising into the low to mid 70’s in nearly all valley locations. While nearly calm conditions prevailed on Friday and Saturday, breezes increased slightly during the day on Sunday, reaching speeds of 10 to 15 mph at their greatest intensity. Bee flight operations were not impacted by the breezier conditions on Sunday and observers reported  7 to 8 hours of very good to excellent activity on each day during the period.

Bud development in the Sacramento Valley has progressed quite rapidly over the past few days, pushing many of the region’s more advanced varieties and plantings past their peak bloom. The early blooming Sonora is now well beyond its peak bloom and has a significant proportion of its flowers in the petal fall and jacket stages. Peerless leads the Nonpareil, California types and Monterey, with advanced examples of each of these varieties now shedding petals aggressively and moving into the jacket stage. Observers have noted a wide degree of variation within the region. This is best demonstrated by the Carmel. While the Carmel, on average, has yet reach its peak bloom, advanced plantings have also begun shedding petals.  This trait carries into the late blooming Butte and Padre, with some plantings showing very few flowers available and other orchards well into bloom.

Dry weather during the past week has allowed the region’s orchards to dry out nicely, following the previous weekend’s rainfall. Growers are watching their orchards closely for signs of fungal infections. As noted in previous reports, those with susceptible varieties have opted to treat their plantings to prevent infections from spreading.

Patchy fog blanketed the central region at sunrise each morning during the period, but burned off quickly to reveal high, thin clouds and bright warming sunshine. Morning low temperatures were reported in the low to mid 40’s, while daytime highs reached into the low to mid 70’s. The foggy mornings did little to hamper the bee’s efforts over the weekend, only slightly delaying the start of their workday. As a result, observers reported from 6 to 7 hours of excellent activity in the foggier areas of the region, while areas with little to no early morning fog received from 7 to 8 hours of excellent activity.

Observers are reporting that bud development in the northern San Joaquin Valley is progressing at a very rapid pace, with many plantings in the region quickly approaching their peak bloom. The early blooming Sonora reached its peak condition over the weekend and has begun to shed a significant proportion of its petals. Nonpareil and many California type plantings are nearing their peak bloom, working in unison with the Monterey, with each of these important cultivars exhibiting excellent overlap. While the Carmel continues to trail the Nonpareil and California types, there is enough bloom now available to provide ample pollination opportunities in the region’s Nonpareil and Carmel orchards. The bloom of the Butte and Padre plantings is also making its presence known, with the first open flowers of these late-blooming varieties now making their appearance.

While the past week has remained dry, morning fog and very heavy dew has translated into a high degree of moisture on the bloom for several hours each day. This excessive moisture can promote fungal development as easily as rainfall. As a result, sprayers could be heard throughout the night as growers worked to complete preventative fungicide treatments, as well as foliar nutrient applications while the bees remained safely in their hives.

Generally clear skies, with patchy early morning fog and a few high, thin clouds graced the southern San Joaquin Valley over the weekend. Morning low temperatures were widely reported in the low to mid 40’s, while daytime highs reached into the low to mid 70’s throughout the region. The absence of winds, along with the warm temperatures and bright sun coaxed the bees from their hives early in the day, providing for 8 to 9 hours of excellent activity on the rapidly developing bloom. 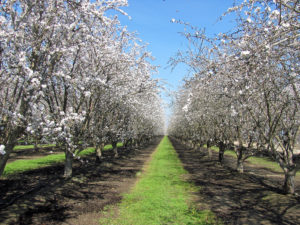 Observers have reported very rapid expansion of the bloom in the southern San Joaquin Valley. With the exception of the Padre, all major varieties are now presenting flowers for pollination. As is normally the case, the early blooming Sonora leads the way this year, with the greatest proportion of its flowers open and available. The California type varieties are following closely behind the Sonora and lead the Nonpareil in vast majority of the region’s plantings.

While the overlap between varieties is reported to be quite good, on average, observers have noted a wide degree of variation between geographic areas. This trait has become more pronounced in recent years. However, observers are noting that the variation has become more evident this year, given the increasing influence of soil types, salinity and water stress. Orchards planted on sandy soils are running well ahead of those planted on heavier soils and those in areas with less water or salinity stress. These observations are exacerbated by the fact that a significant number of orchards are exhibiting a weaker bud set and corresponding weaker bloom this year, resulting from the stresses imposed by lack of water and increasing salinity during the last growing season.

While growers with water available from privately own wells have begun to supplement moisture levels in their orchards, those who rely on surface water from irrigation districts are hopeful they will have enough to get through the 2015 growing season. The vast majority of the region’s growers employ some form of low volume irrigation, either drip or micro-sprinkler and use their water very efficiently. However, the continuation of drought conditions is worrisome for the region’s growers.