From The Desk of
Mel Machado,
Director, Member Relations

This report covers observations and conditions just prior to the start of the 2016 bloom. We anticipate posting the first of the daily Bloom Reports during the week of February 7, 2016.

Winter weather in the Sacramento Valley has been significantly cooler and wetter than last year. Temperature levels have provided more adequate chilling hours than we received last year. Numerous storms have brought much needed precipitation and snowpack to the region, both totaling above-average levels for this time of year.

Trees are beginning to wake up in the northern region and buds are beginning to swell in early blooming varieties. There has been no observed emergence of green tissue from the buds to date. Green tips are expected to start presenting through the buds next week. Truckloads of bees are still arriving from out of state and bee keepers have begun to place hives in orchards. Bee keepers in the area are optimistic about their bee quality though a few have suffered some losses going into the season.

Pre-emergent herbicides have been applied to the tree rows to help control weed growth, and winter applications of fertilizer were applied in between storms. Wet weather made removal of mummy nuts difficult in places as growers had to wait for fields to dry out before they could get their equipment into the orchards. Growers are now anxiously awaiting the start of bloom and speculating on how well Mother Nature will cooperate. 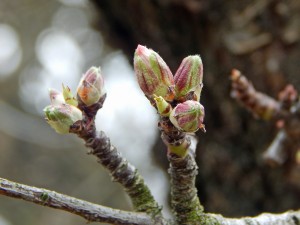 Weather in the Northern San Joaquin Valley has been significantly colder and wetter than the last few years. Heading into bloom, the amount of rainfall received to date has provided orchards with a wet soil profile, and growers with access to well water have not needed to depend on their groundwater as they have in years past. Temperatures in December and January rarely exceeded the mid-60’s and nighttime lows were consistently in the 30’s to low 40’s. Growers are satisfied that they’ve received adequate chilling hours, something they didn’t enjoy last year.

Green tissue is starting to break through scales in most of the Sonora and Neplus varieties with some green tips beginning to show in some early Nonpareil orchards. Pink tips are starting to emerge on the outside rows of Sonora blocks in warmer areas. Many growers are reporting that they are happy with their bud set.

Growers have been busy completing winter activities such as pruning and shredding. Conditions have been significantly better for winter sanitation this year as most growers were able to get through their orchards in between storms. Growers have worked to apply their systemic herbicides and pre-emergent sprays before hives are placed in their orchards. New orchards have been planted when weather has allowed and will continue with no rain in the forecast over the next week.

Bees are beginning to be moved out of their staging areas and into orchards. Getting into orchards has been a tricky task over the past week, as the rains have made fields inaccessible at times in areas with heavy soil. Growers are now waiting to see how the weather over the next several weeks will affect the outcome of bloom.

The southern region has received above average levels of precipitation to date, allowing growers to give their agricultural wells a break after receiving little to no surface water last growing season. The winter weather has also provided ample chilling hours during the dormant period.

In areas where growers were able to get into their orchards in between storms, growers experienced more favorable weather for winter sanitation than last year. Growers were forced to use poles to knock mummies by hand in areas where heavier soil prevented them from getting mechanical shakers into their fields. Pruning and brush shredding activities took place as conditions allowed over the past few months.

Growers have worked quickly to wrap up herbicide and dormant sprays before hives are delivered to their orchards. With bloom right around the corner, bees can now be seen in fields along the 99 corridor through Bakersfield, and more will be placed rapidly throughout the south valley over the next week. Growers are paying close attention to weather forecasts during bloom, and are anxious to see how the El Nino weather system will affect pollination.