High winds ruled the day again in the Sacramento Valley, with sustained speeds averaging between 15 and 20 miles per hour and gusts up to 30 miles per hour. Morning lows around 40 degrees quickly gave way to clear skies and afternoon highs in the mid 60’s. The high winds kept bees close to their colonies and out of the center of orchards. Because of these conditions, bees were only able to put in 2 to 3 hours of poor activity, focusing near the hives.

High winds scrubbed petals from the trees throughout the Sacramento Valley on Monday, greatly increasing the proportion of orchards in the petal fall and jacket stages. Only Butte and Padre plantings have a significant proportion of their flowers available for pollination, with these late blooming types also rapidly shedding their petals. Due to its relatively later start compared to orchards in the Chico/Durham area ,the greatest proportion of flowers available for pollination is found in the southern and western areas of the region.

Despite the high winds in the northern region, observers have noted very little tree loss, due largely to the lack of leaf canopy on the trees at this time. The lack of a full canopy allows wind to pass through the branches without much resistance.

Early overcast skies gave way to sunshine and light winds by early afternoon in the northern San Joaquin Valley. Morning temperatures in the lower 40’s gave way to afternoon highs in the lower 60’s, after the morning clouds dissipated. The bees began foraging as the clouds diminished and with favorable afternoon conditions were able to put in 5 hours of good activity.

Monday’s lighter winds in the northern San Joaquin provided for a much lower loss of petals than was experienced in the Sacramento Valley. Observers are reporting the first nutlets of the early blooming Sonora are just beginning to break free from their jackets. While the bloom is declining in the Nonpareil, Carmel and California varieties, the late blooming Butte and Padre still have a significant proportion of their flowers viable and available to the bees. This is particularly so in eastern Merced County, which is running approximately two days behind the balance of the county due to the heavier soil conditions found there. Many Butte and Padre plantings east of the community of Merced are just now at or near their peak condition.

Growers are beginning to apply fertilizers to support the developing crop. Barring any additional rainfall in the near future, growers with water available will also begin irrigations as needed.

Rain made its way through the southern region on Monday, providing some areas with a good soaking while other areas received very little precipitation. Well over an inch of rain fell from the early morning through noon in areas east of Highway 99, while areas to the west received from trace amounts to a few tenths of an inch. The rain kept bees in their hives for much of the morning, although observers noted good activity between and after rain events. Depending on local weather, from 3 to 5 hours of good bee activity was noted in the orchards, which was a welcome sight after a weekend of little bee activity. 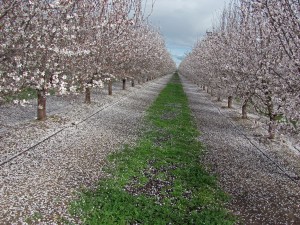 The stormy, wet conditions of the past few days have delayed some routine orchard tasks. All in the region are watching the weather forecast for signs of cold weather and the threat of frost as the nuts grow and emerge from their jackets.