Sunshine and relatively clear skies covered the Sacramento Valley on Wednesday as the bloom is coming to an end. Minimum temperatures failed to drop below freezing, dipping only into the mid 30s, then rose steadily to their highest values for the day in the lower 70’s. The mild temperatures, combined with low wind speeds and a few high, thin clouds made for a beautiful day in the northern region. With the beneficial weather bees were out in full force working on the small amount of bloom remaining in the region, putting in 7 hours of very good activity.

The bloom in the Sacramento Valley is entering its closing days. Aside from a few Carmel plantings in the southwest areas of the region, Butte and Padre remains the only varieties presenting any significant amount of bloom available for pollination. As may be seen in the photos accompanying this report, the orchards have taken on the characteristic “dirty” appearance imparted by the flower buds being nearly entirely in the jacket stage.

Growers were provided with some welcome relief from the threat of frost on Wednesday, allowing their orchards to dry out a bit after two days of running their irrigation systems to prevent damage to the developing nutlets.

Beautiful spring-like weather provided the northern San Joaquin Valley with additional pollination hours, as bloom is nearing completion. Morning lows in the upper 30s quickly gave way to highs in the mid 60s with very little wind. Given these favorable conditions, observers noted 7 hours of very good bee activity. As has been the case for the past few days, Butte, Padre and Mission plantings have drawn the bee’s greatest attention as they provide the largest amount of bloom remaining in the region.

Bloom is nearing the end in the central region. The early blooming Sonora variety has no viable flowers available for pollination, while nutlets are starting to emerge from their jackets in measurable levels. The bloom of the Nonpareil variety, along with its pollenizers, has declined significantly in recent days and has now fallen to 10% or less across the region. While the number of viable flowers of Butte and Padre is also receding, these late blooming types still have approximately half of their flowers available for pollination and are drawing most of the bee’s attention.

In addition to providing support for the developing nutlets, recent weather conditions have also given growers an opportunity to get into their orchards. Orchard maintenance continues, with growers mowing vegetation and applying fertilizers as needed. 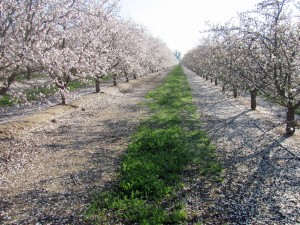 Sunshine and clear skies covered the southern San Joaquin Valley on Wednesday as bloom approaches its end. Temperatures in the mid 30s during the morning hours gave way to afternoon highs in the upper 60s. Mild temperatures, clear skies, and wind speed ranging for zero to five miles per hour made for a very nice day in the southern region. Bees were out early and orchards with viable flowers were humming most of the day, with observers noting a solid eight hours of very good activity for the day.

The bloom of the southern San Joaquin is now in rapid decline. While the nutlets of the Sonora are growing within and breaking free from their jackets, the last of the spent petals are being cast from the vast majority of the region’s orchards. The bloom of the Carmel is also nearly complete, with less than 10% of its flowers remaining available to the bees. Meanwhile, the late blooming Butte and Padre cultivars remain the last of the major varieties with a significant proportion of their flowers open for pollination.

Orchard maintenance tasks continue in the southern region. Growers have been sending mowers, sprayers and fertilizer spreaders into the fields to support the developing crop.