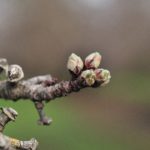 This report covers the conditions and activities observed prior to the start of the 2021 bloom. We anticipate starting regular weekly bloom reports during the week of February 8, 2021.

Dry conditions have dominated the first months of the winter of 2020/21, producing rainfall and snowpack totals significantly below seasonal norms at the end of the year. While the last months of 2020 produced little precipitation, the final week of January 2021 delivered a notable change in the state’s weather, with several strong systems delivering significant rain to much of the central valley and deep snow to the Sierra Nevada watershed. Targeting the middle of the state, storms that swept across the region on January 27 and 28 dropped up to 3.5 inches of rain in the northern San Joaquin Valley, with lesser amounts in the Sacramento Valley and southern San Joaquin. Strong winds accompanied the storm, with speeds reaching as high as 45 mph. Observers have reported trees down in older orchards throughout the central valley. However, with few exceptions, tree losses failed to reach significant levels owing to the dry, and thus more stable soil.

While increasing significantly compared to year-end totals, snow measurements at the end of January remained below seasonal norms, with the average of all reporting stations reaching 66% of normal for the date. The average snow water equivalent was reported at 11.1 inches. Allocations from the federal and state water systems are currently set at 10% of contracted amounts, with many local irrigation districts waiting to announce allocations for the 2021 irrigation season.

Despite the absence of rainfall, the central valley has experienced quite a few foggy mornings. While making for treacherous driving conditions, fog greatly enhances the removal of mummies; nuts that failed to drop from the trees during harvest and serve as the prime overwintering home for Navel Orange Worm (NOW). To remove the mummies, growers send shakers back into the orchards to shake them from the trees, then sweep and grind them using flail mowers, thus destroying the mummy as well as the worms living within.  Mummy removal, also known as orchard sanitation, is the foundation of a NOW Integrated Pest Management program and this winter’s foggy days have provided the best mummy removal conditions in years.

While creating reason for concern, the dry conditions have at least provided ample opportunity to complete winter-time tasks. Fertilizer and soil amendments have been applied, Older, low producing orchards have been removed, land has been prepared and trees have been planted. Crews have been pruning and training trees and shredders have been grinding the resulting brush. Dormant season operations will continue for the week or so, as all in the region prepare for the critical bloom period.

Beekeepers have begun delivering hives to the orchards. Hives began arriving in December, as beekeepers staged the colonies in open areas around the valley where they can be monitored and cared for prior to moving them into the orchards. Except in cases where growers have been able to provide irrigation, the lack of rainfall in early winter has delayed germination of cover crops and weed species within and around the orchards, limiting the amount of pre-bloom forage for the bees to feed upon. Beekeepers have been feeding hives to maintain the populations and late January’s rainfall has helped to bring on the first wildflowers of the year.

Observers are reporting normal bud development in all growing areas. As shown in the photo accompanying this report, buds of the early blooming Sonora variety are beginning to move into the early phase of the green tip stage, with advanced examples of the Nonpareil just beginning to show the first signs of green tip. 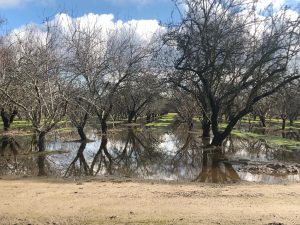 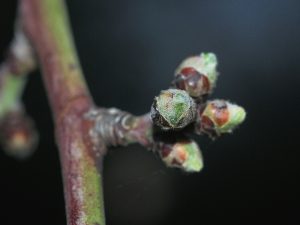 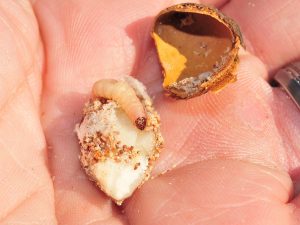 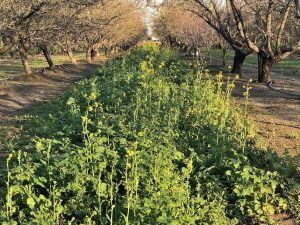 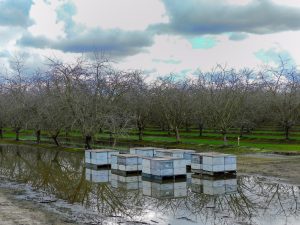 Hives in wet condition near Chowchilla in Madera County 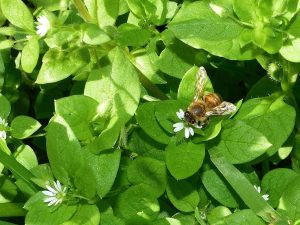 Foraging on Chickweed flowers on the orchard floor