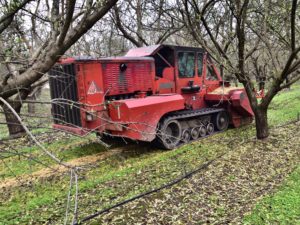 This report covers the conditions and activities observed prior to the start of the 2020 bloom. We anticipate starting the regular bloom reports during the week of February 9, 2020.

The winter of 2019/20 has proven to be quite variable. Weather conditions have been drier and warmer than many would like to see, with most of the rainfall received this winter fell during late November and mid-December. Official measurements placed the California snowpack at 90% of normal on January 2nd. However, official measurements declined to 72% of normal by the end of January.

Temperatures have also “seemed” a bit warmer than normal. However, chilling hour accumulations are running roughly equivalent to 2018/19, with reporting stations running above and below last year’s levels by the end of January. While conditions have roughly matched last year, observers have noted that many orchards have carried quite a few leaves throughout the winter, causing questions about the depth of the winter dormancy. The greatest number of leaves are found in younger, more vigorous plantings and in orchards along the I-5 corridor on the west side of the Central Valley.

Winter dormancy provides a resting period for California’s almond orchards. However, the pace of orchard activities changes slightly as growers care for their orchards and prepare for the coming season. Crews have been pruning trees, removing branches that are weakened, broken or impeding equipment passage. Others have been shredding the resulting brush and applying amendments to improve soil conditions. 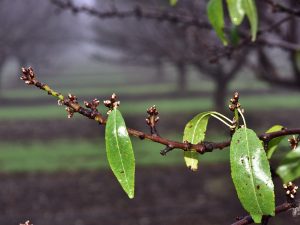 Last of the Leaves Hanging on Bennett Variety near Modesto

The precipitation received this winter has fallen short of average accumulations; however, the Central Valley has experienced more fog this year. California’s infamous ground-hugging Tule Fog is a “two-edged sword”; making driving conditions more hazardous but blessing the orchards with moisture required to adequately sanitize the trees. The prime method of mitigating Navel Orange Worm (NOW) is orchard sanitation. Commonly referred to as mummy shaking, it is greatly enhanced by the persistent fog as it weakens the nut’s attachment to the tree allowing for easier removal. Growers prefer to leave no more than one mummy nut per tree in order to enhance NOW control and reduce crop losses during the subsequent year. After shaking, growers sweep the nuts from under the trees and destroy them using flail mowers. Growers are aiming to complete the destruction of the mummy nuts by mid-March in order to eradicate as much NOW as possible. Proper sanitation provides better NOW control and reduces insecticide treatments during the growing season.

Removal and replanting of orchards has peaked over the last two months throughout all regions of the state.

Observers have noted normal progression of bud development in all areas. The most advanced examples of the early-blooming Sonora variety are presenting a scattering of open flowers, particularly in rows along roads, which can run a few degrees warmer than the balance of the orchard. Advanced Nonpareil can also be found moving into the earliest stages of green tip, though a few growers have reported finding scattered open flowers in the most advanced trees.

As the bloom approaches, beekeepers can be found working through each night placing pallets of hives in the orchards. Hives began arriving during December as beekeepers dropped the colonies in “bee yards” ahead of the bloom. Hive placement within the orchards will continue in the coming weeks as beekeepers work to complete deliveries by the 15th of February. 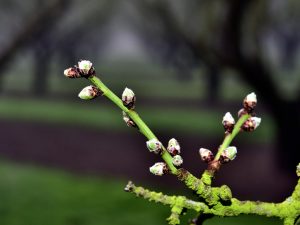 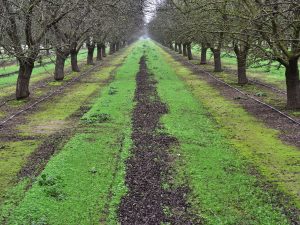 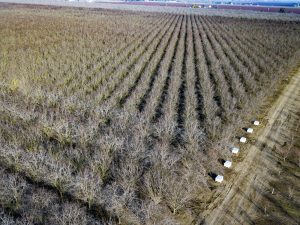 Hives Waiting for the Bloom near Tracy 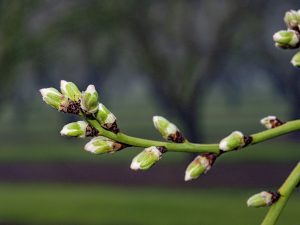