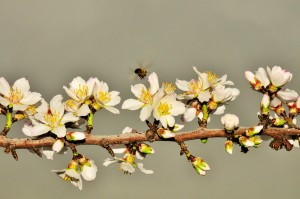 This report covers conditions and observations made on Monday, February 10, 2014.

Overcast skies covered with some pre-dawn rainfall yielded to light fog around the region as the remnants of the previous weekend’s storm system exited the region.

Bee activity on the small amount of bloom available was somewhat subdued by the dark skies and breezy conditions. Nevertheless, observers reported approximately 5 to 7 hours of very good activity in areas presenting adequate open bloom for pollination, while in the southern region comfortable temperatures inspired the bees to work the orchards for 6 to 8 hours during the day in search of forage. 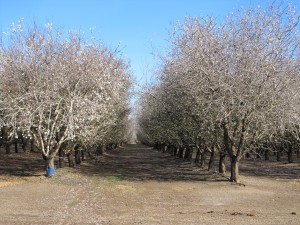 View down-the-row of the Aldrich and Nonpareil in the Orland area of Glenn County.

The bloom in the Sacramento Valley has been quite diverse this year, with many plantings running well ahead of the average, particularly those located along the west side of the region. Now that the Sonora and Peerless varieties have met the 10% qualification, we can now pronounce that theses early blooming types are officially in bloom. These varieties are being closely followed by the California types, Nonpareil and the Monterey, which are all presenting the first measurable percentage of the flowers for pollination. Late blooming varieties are also transitioning from the dormant stage, with the Butte variety now starting its evolution into the pink stage. 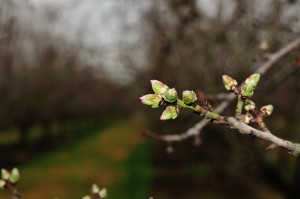 The early pink tip of the Nonpareil and Carmel almond varieties.

In the central region, the northern San Joaquin Valley, bud development continues its steady pace. Sonora plantings are exhibiting quite a bit of diversity, with some plantings now presenting as much as 35% open bloom and others only at 5%. Observers have also noted that older trees in general are also running ahead of younger, more vigorous plantings. The Nonpareil is now well into the green tip stage and has begun its evolution into pink tip in advanced plantings, which in some cases are also showing a scattering of open flowers. The Fritz, Aldrich and Price varieties are leading the Nonpareil in all areas of the region and are moving well into the pink tip stage in many plantings. Buds of the late-blooming Butte and Padre have also begun to push, with both types now moving into the green tip stage.

The southern region is reporting good progression in bud development with many orchards moving from the green tip stage into pink tip. Advanced examples of the Sonora variety are running well ahead of the average and observers have noted that many advanced Nonpareil and California type varieties are also displaying a scattering of open flowers across the tops of the trees. While the overlap between varieties appears to be quite good at this point in time, California types are leading the Nonpareil in many orchards around the region.