Excellent weather continues to support bloom in the Sacramento Valley. Early fog in the Williams area burned off by 10:30 and temperatures quickly rose from the low 40’s during the morning hours, reaching into the low 70’s by early afternoon. In the Chico area, temperatures ascended even faster due to the lack of fog. Winds stayed relatively light most of the day, making for another gorgeous day in the northern region. With bloom beginning to wind down in most cultivars, orchards continued to hum with bees. Observers noted that the bees put in 6 to 8 hours of very good activity. 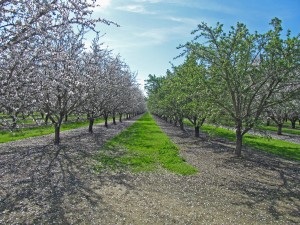 Bloom has hit its overall peak in the northern region for most varieties. The early blooming Sonora has nearly shed all of its petals in the Chico area, and has a very small measurable proportion of its flowers available to the bees, while in the Williams area, farther to the south, the Sonora still has approximately 25% of its flowers open and available. Nonpareil plantings reached their peak condition in the northern area of the region a few days ago, while southern areas are nearing their peak bloom at this time. This pattern also exists for all other varieties, with the northern areas of the region running a few days ahead of plantings in the Yolo and Colusa County area

Early blooming varieties are pushing leaves at a rapid rate. The Winters variety in particular, being a very early blooming type is becoming increasingly green with leaves as each day passes.

The central region experienced the heaviest fog it’s seen since the beginning of bloom, covering much of the Northern San Joaquin Valley until late morning. Temperatures struggled to make it in to the mid-60’s after early morning temperatures were reported in the low 40’s. Fog lifted to reveal scattered clouds and higher wind speeds than the past few days. As a result, bees stayed in their hives longer and remained inactive for most of the morning. Observers reported 5-6 hours of good activity mostly in the afternoon.

Bloom continues to advance quickly in the central region. The early blooming Sonora is now well into the petal fall stage, while the Nonpareil and most of its pollenizers have reached their peak in the majority of the region. Advanced examples of the Nonpareil and California types are now also beginning to shed petals to the orchard floor. The Carmel has made great strides in the past two days and is racing to catch up with its associated Nonpareil. Butte and Padre have also picked up the pace, with a significant proportion of the flowers of these late blooming types now attracting the attention of the bees.

Overall, growers have been happy with the bloom progression and the degree of overlap between varieties. Other than the early morning fog, this week’s excellent weather has provided ample opportunities for the bees to cover the rapidly advancing bloom.

The southern San Joaquin Valley is getting a big push from Mother Nature. Patchy fog burned off by 9 am giving way to mostly clear skies and temperatures in the mid 70’s with light breezes. Temperatures rose rapidly from lows in the mid 40’s and orchards were humming with bee activity early. With bloom at or near its peak in many orchards, observers reported that bees put in 8 very good hours of activity.

The bloom in the southern region has advanced strongly over the past few days. Early blooming Sonora, along with Nonpareil, the California types, Carmel and Monterey are all, on average, presenting the vast majority of their flowers for pollination. This has produced excellent overlap between varieties in any given orchard. The late blooming Butte is also on the move and is being following closely by the Padre, with adequate degrees of overlap visible.

Though we are in the midst of a rapid bloom, the daily progression is not unprecedented. The excellent conditions that have conspired to push bud development ahead have also provided good opportunities for the bees to do their work in the orchards.