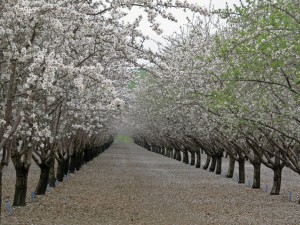 Fog covered large parts of the Sacramento Valley on Wednesday, slightly reducing the pace of bud development in the Northern region. Observers in the Chico area reported the heaviest fog, with skies not clearing until mid-day. Conditions were somewhat better in the Williams area, where fog was slightly less dense and lifted earlier in the morning. Foggy conditions buffered the rising temperatures throughout the region, with morning lows reported in the lower 40s and afternoon high readings rising only into the low- to mid-60s. Areas with the most foggy condition received few bee hours on Wednesday, with two to three hours of good activity reported in the northern areas of the region and six to seven hours reported under brighter skies along the west side of the valley.

Very few flowers remain in the early blooming Sonora as over half have shed their petals. In the Chico area, Nonpareil bloom is tapering off as petals continue to fall leaving only developing nutlets in their protective jackets. In the Williams area, Nonpareil plantings are approaching their peak number of flowers available for pollination. In both areas the Monterey and California type varieties are a day or two ahead of Nonpareil in their bloom cycle. Carmel in both areas remains one or two days behind the Nonpareil. Butte plantings are almost to their peak number of flowers available for pollination in the Chico area. Plantings of Butte in the Williams area are two to three days behind the Chico area. Padre in both regions are a day behind the Butte.

To date, observers have been pleased with hive strength of bees, noting that most orchards have had plenty of bees working in them on a daily basis. It appears that most growers had their bees before bloom began.

Growers with access to available water began irrigating, doing as much as they can to give their trees and potential crop the moisture required for a successful growing season. Bee availability and hive strength have not been an issue in the Central region. Plenty of bees have been observed in fields throughout the region.

Thick fog returned to South San Joaquin Valley covering most areas until mid-day. The early fog kept morning lows in the mid-40s until the fog lifted. This resulted in a drop in high temperature from yesterday, resulting in highs in the mid-60s. Fog gave way to clear skies and light wind in the afternoon. Bees stayed in their hives until the fog lifted. With bloom beginning to peak in the southern region, bees were not able to put in as many hours as in previous days. Observers reported that bees put in four to seven hours of moderate activity, depending on when the fog lifted.

In spite of the cooler, foggier weather, bloom continued to advance at a quick pace for some varieties. The early blooming Sonora peaked on Monday and is losing more of its petals daily. Nonpareil in the region remained around peak levels of flowers available for pollination with California type pollinizers in lock step with them. The Monterey cultivar is approximately a day ahead of Nonpareil. Carmel made big advancements and is at near peak levels of flowers available for pollination. Butte and Padre plantings also made significant advancements in spite of the cooler weather. Those three varieties had progressed far enough in the previous day that what little decent weather was received pushed them to open their flowers. The rapid advancement of the Southern region’s bloom has moved it ahead of the Central region for the year.

More growers with available water are starting to irrigate to support the coming crop. Observers have noted that most growers have plenty hives for pollination with no real complaints about availability. Hive strength appears to be adequate for pollination purposes, with plenty of bees flying in orchards.