This report covers conditions and observations made between Friday, February 19 and February 21, 2016.

Cooler, cloudy weather on Friday and Saturday yielded to warm and sunny conditions on Sunday in the Sacramento Valley. Temperatures never rose above the high 50s on Friday after overnight lows in the mid 40s. Saturday was not much better with overcast skies covering the valley and temperatures not climbing much beyond the low 60s. Sunday saw a break in the weather pattern as lows in the upper 30s quickly gave way to highs in the mid 60s. Bees worked sparsely on Friday and Saturday but were able to work for 7 solid hours on Sunday thanks to the better conditions. 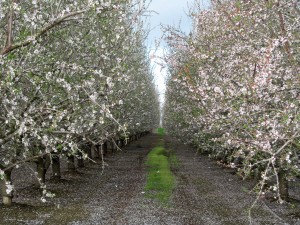 Down-the-row shot of a Butte and Padre orchard

Bloom is winding down quickly in the northern region. The early blooming Sonora has no viable flowers remaining and only 20% still have any petals on them at all. Nonpareil, Monterey, and California-type pollenizers are down to less than 20% flowers presenting for pollination while over one-third of the flowers have completely lost their petals. Carmel is a day behind Nonpareil with 30% open flowers. The late blooming Butte reached maximum numbers of open flowers on Thursday while the Padre reached peak numbers on Saturday. Both varieties have less than half of their flowers presenting for pollination. Orchards continue to exhibit excellent bloom overlap between different varieties.

A second round of fungicide applications have begun as needed. New plantings have started going in the ground after rain last week brought them to a halt. 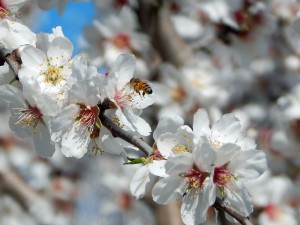 Bloom stage in the Padre variety in Stanislaus County.

Inconsistent weather highlighted the weekend in the Northern San Joaquin Valley. Friday and Sunday were mostly sunny with highs in the mid 60s after morning temperatures in the low 40s with gentle breezes both days. Saturday saw overcast skies and cool weather until noon when the sun finally broke through and temperatures rose to the mid 60s. Bees got very little work done until the sun broke through Saturday, not venturing far from their hiver until the last few hours of sunlight. Friday and Sunday, bees were able to get around 6 good hours of flight.

All varieties have passed over their maximum number of flowers presenting for pollination in the central region. Bloom is winding down as petals are shedding. Flowers on the early blooming Sonora have under 20% of their flowers fully intact while over half of their flowers have no petals remaining. Nonpareil, Monterey, and California-type pollenizers have under half of their flowers fully intact. The Carmel cultivar achieved peak numbers of open flowers on Friday and began shedding petals quickly. Butte and Padre had their maximum number of open flowers on Saturday at over 80%. Petals are slowly beginning to shed on these cultivars.

Management of orchard floors continues as growers try to keep vegetation low to maintain warmer overnight conditions in case of frost. A second round of fungicide applications has begun as growers deem necessary.

Weather in the southern region varied throughout the weekend. Friday was warm with daytime highs in the mid to upper 60s. Sunny skies and light winds allowed bees an opportunity to put in 7 to 8 hours of very good activity. Conditions on Saturday were a little cooler, with daytime highs only reaching the low 60s. Morning fog and cloudier skies kept temperatures lower and denied bees a full day of work. Observers reported 5 hours of fair bee activity. Sunday, however, observers reported 6 hours of very good bee activity, due largely to clear skies and warmer morning temperatures. 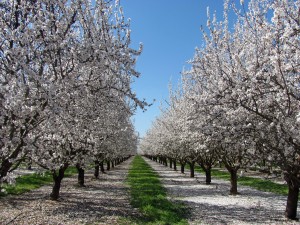 Bloom and petal fall stages in a Butte and Padre orchard.

Bloom continued its rapid progression over the weekend, as the Nonpareil and California-type pollenizers developed quickly from the bloom to petal fall stage. Observers noted that even with very little wind, petals were falling from their flowers at a steady pace. With the later blooming Butte and Padre varieties reaching their peak bloom over the weekend, all varieties have now exceeded maximum bloom and are moving into the petal fall and jacket stages. With favorable weather conditions, however, there is still potential for pollination in many orchards.

Growers that have not completed a second fungicide spray are preparing to do so in the coming days and they continue their general orchard maintenance activities.