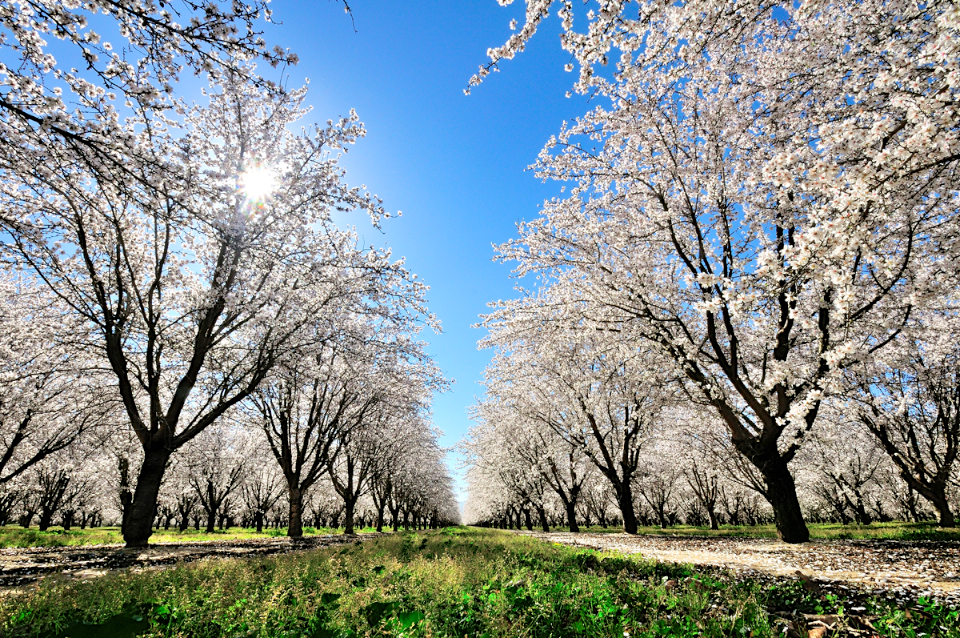 Bright, clear skies and light breezes typified the weather throughout the almond growing region over the weekend, providing good support for the bees’ labors in the orchards. Morning low temperatures were reported in the upper 30’s to lower 40’s throughout the region, with daytime highs reaching into the low to mid 70’s.  Light breezes augmented the comfortable temperatures, providing excellent support for the bee’s efforts and observers reported 8 hours of excellent activity on each day during the period.

Throughout the Sacramento Valley, Nonpareil and California type plantings have on average, reached their peak bloom, with advanced examples now following the Sonora plantings into the petal fall and jacket stages. Observers have noted that the bloom in many plantings held well over the weekend in defiance of the rapid pace exhibited in the latter half of the week. Carmel and Monterey, which also serve as pollenizers for the Nonpareil are also at their peak bloom in many of the region’s orchards, providing excellent overlap with the Nonpareil. The Sonora, Winters and Peerless varieties lead the region’s plantings in the daily evolution from the brilliant white of the bloom into the increasing green of the growing season. Observers are reporting these early blooming types are taking on the characteristic “shaggy” or “dirty” appearance as the nutlets develop within their jackets. As the Nonpareil and California types begin their evolution into the petal stage over the next few days, the Butte and Padre varieties will become the focal point in the region as these late blooming types move towards their peak condition and attract the attention of the bees. Butte and Padre almond trees in full bloom in the Durham area of Butte County, California

The northern San Joaquin Valley was virtually awash in white flowers over the weekend as many Nonpareil and California type plantings reached their peak bloom. Throughout the region, the first-to-bloom Sonora plantings have been shedding petals aggressively and are taken on a green hue as their leaves emerge and expand in size, ready to support the nutlets developing within their jackets.  Reflecting the diverse nature of the this year’s bloom, while advanced Nonpareil and California type plantings peaked in the past week, other plantings reached their peak over the weekend and still more will be peaking within the next day or so. With decline of the Nonpareil and California type varieties, these orchards are also becoming very quiet as the bees divert their attention to those varieties now presenting open flowers. Butte and Padre plantings are beginning to reach their peak bloom in advanced orchards along the west side of the region. Being more attractive to the bees, these orchards were literally humming with activity. At the same time and continuing the diversity observed in the earlier varieties, the more delayed orchards in the region are just beginning to present the first of their flowers for pollination. An aerial view of the patchwork of almond orchards in bloom in the Ripon area of San Joaquin County, California.

In the south, observers are reporting that the Nonpareil and California type varieties, on average, reached their peak bloom over the weekend and have begun their evolution into the petal fall and jacket stages. Meanwhile, the proportion of flowers remaining viable and available for pollination in the earlier blooming Sonora declined significantly over the weekend, leaving the majority of the flowers in the petal fall and jacket stages. Carmel and Monterey are now at center stage in the southern region’s bloom, with these important Nonpareil pollenizers now at or near their peak condition and drawing the bees’ attention. While they trail the Nonpareil, these varieties are still providing good overlap and excellent pollination potential. The Butte leads the Padre within the late blooming group, continuing the strong surge in development that began at the end of last week. These plantings are moving rapidly towards their peak bloom, although they are also displaying the wide degree of variation that we described last week in the balance of the region’s orchards. One observer noted that the variance from one side of the San Joaquin River to the other in the Kerman and Madera areas was so pronounced that it seemed like two different seasons. Butte and Padre almond trees in the Madera area of Madera County, California.

Forecasts of rain during this week have inspired growers to begin treatments to prevent fungal infections on the bloom and the developing nuts. While most have withheld treatments in light of the dry conditions, the forecast now calls for several days of rain, starting this Wednesday. Unlike previous storms, these systems are forecast to bring rain to the entire Central Valley.