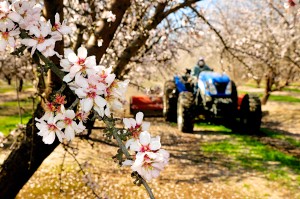 Weather conditions provided the fourth consecutive day of good support for the 2014 bloom, with clear skies and calm winds providing plenty of opportunities for the bees to work the fields. Morning low temperatures were widely reported in the low to mid 40’s, and then rapidly moved into the mid 70’s by mid-afternoon. The calm conditions and bright, clear skies drove the bees from their hives by mid-morning, allowing for approximately 8 hours of excellent activity in the orchards.

In the northern region the early blooming Sonora variety is easing into the completion of its bloom period, led by the California types, the Nonpareil has also begun its precipitous decline from the peak bloom achieved just a few days ago. 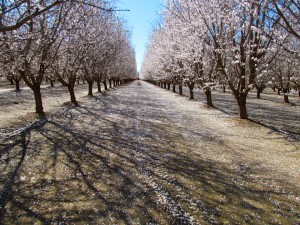 The Nonpareil and Aldrich almond varieties in the Durham area of Butte County, California.

Nutlets of the Sonora, Winters and Peerless varieties can now be easily found growing within their jackets, with jackets in advanced planting also splitting to reveal the developing nut. Along with the jacket split comes increased susceptibility to frost, inspiring growers to ensure that their orchards are in the best possible condition to avoid damaging temperatures. While the Carmel is now at its peak bloom, the Monterey has reached its peak and is now sliding into the petal fall and jacket stages, as well. The focus of the bees’ attention is now shifting to the late blooming Butte and Padre, which are aggressively moving towards their peak bloom. Growers are hoping that the bees will have enough time to adequately cover the pollination needs of these late-blooming varieties before the rain forces them to remain in their hives. 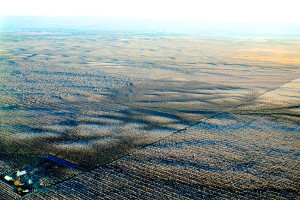 Aerial view of the almond orchards in the foothills of eastern Stanislaus County, California.

In the central region the Sonora variety has now completed its effective bloom having dropped below the 10% threshold, on average, across the northern San Joaquin Valley. The Nonpareil and California type varieties are now, on average, moving into the petal fall and jacket stages. However, it must be noted that the most delayed examples of both types have just reached their peak condition. An analysis of the values shown in the table below also indicates that the Carmel and Monterey have moved just beyond their peak bloom and with the decline of the early and mid-blooming varieties, attention now shifts to the late blooming Butte and Padre, which are developing rapidly.  However while the Padre is approaching its peak bloom, a significant number of plantings remain quite delayed and are presenting as little as 10% of their flowers for pollination. 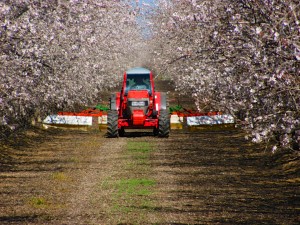 An almond grower controlling the weed growth within the orchard in the Chowchilla area of Madera County, California.

In the southern part of the growing region the unseasonably warm temperatures of the past few days have produced strong advances in the almond bloom. The Sonora variety is now easing into the completion of its bloom, with just over 10% of its flowers remaining open and available to the bees. Meanwhile, the Nonpareil and California type varieties have begun an aggressive slide from the bloom into the petal fall and jacket stages. The Carmel and Monterey are now just beyond their peak bloom, with both presenting the vast majority their flowers for pollination, offering excellent coverage of their Nonpareil and California type orchard-mates. Late blooming Butte and Padre are now racing towards their peak bloom, with the aggressive development from the pink tip and popcorn stages readily apparent. Growers are hopeful that these late blooming types will be able to reach their peak prior to the arrival of rain forecast for mid-week, thereby allowing adequate coverage by the bees before the storms force them to remain in their hives.

The petal fall visible in the almond orchards in the Earlimart area of Kern County, California.

Orchards across the Sacramento Valley were alive with activity on Monday as growers prepared for the rain forecast to arrive on Wednesday. Forecasters are calling for as much as three inches of rain on the valley floor, which will make entry into the orchards after the storm’s passage problematic. As a result, growers were racing to complete orchard tasks prior to the arrival of the rain. Mowers and sprayers could be easily found working in the orchards, reducing vegetation in the orchard “middles”, between the tree rows, controlling weed growth within the tree row and applying preventative fungicide materials to the trees in advance of the rain. All in the region are hopeful that the approaching storm will add significant snowfall in the Sierra Nevada watershed and recognize that it will take a number of storm systems to meet the state’s needs.