This report covers conditions and observations made on Thursday, February 25, 2016. 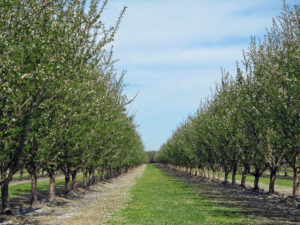 Final stages of bloom in the Chico area.

The Sacramento Valley enjoyed more of the same warm weather Thursday, with morning lows in the mid 40s and daytime highs reaching into the mid 70s. Weekend weather forecasts are calling for continued warm weather, with rain and increasing winds likely Friday night.

Throughout the northern region, observers are reporting that bloom is at or near the ending stages in the Nonpareil, Sonora and California-type varieties, while trace amounts of bloom can be found in the Carmel and Monterey varieties. Butte and Padre varieties still have up to 30% of viable bloom in some areas, mainly along the west side of the valley. While nutlets can be seen poking through their jackets in earlier varieties, only trace amounts have been reported breaking free from their jacket in the Sonora variety.

With rain forecast for Friday evening, growers are busy applying fungicide treatments to help prevent disease caused by excess moisture. In areas of elevated naval orangeworm pressure from last year’s crop, growers are working to blow and shred mummy nuts to help keep the insect pressure lower for the upcoming crop. Crews are working hard to plant new orchards and replacement trees during this window of nice weather before the upcoming rain. 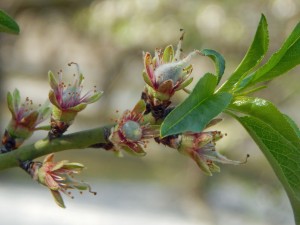 Developing nutlets in the Sonora variety.

Very few flowers remain intact in most varieties in the central region. The early blooming Sonora has no viable flowers left and has lost most of its petals. Nonpareil, Monterey, and California-type pollinators have fewer than 10% of their flowers presenting for pollination and will have none remaining after the weekend. Carmel continues to be a day behind the Nonpareil and should also have no viable flowers remaining by Monday. Butte and Padre are now down to around one-third of their flowers presenting for pollination and should have little remaining after the weekend. 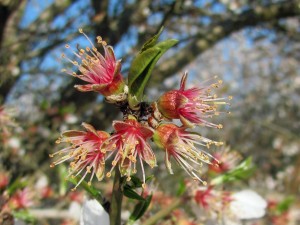 Jacket stage in the Nonpareil variety.

Bloom is continuing to wind down in the southern region. The early blooming Sonora is now presenting less than 10% of its flowers for pollination with over two-thirds of its flowers having no petals. Nonpareil, Carmel, Monterey, and California-type pollinizers now have less than one-fifth of their flowers open and intact while over half of their flowers have lost all of their petals completely. The late blooming Butte is two to three days behind Nonpareil and still has one-quarter of its flowers presenting for pollination. Padre is tracking around a day behind Butte.

The warm weather has caused more growers to start irrigating if they have water available to them as trees are starting to pull moisture from the soil. Flail mowing continues between tree rows as warm weather has spurred weed growth.