This report covers conditions and observations made between Monday, February 29, 2016 and Sunday, March 6, 2016. 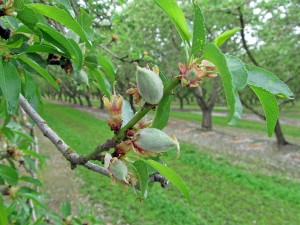 Nutlets as they begin to break free from their protective jacket.

High winds and stormy conditions permeated the Sacramento Valley over the weekend. Skies were sunny and winds were calm Tuesday through Thursday last week. Daytime highs reached into the low 70s with overnight temperatures dropping into the low 40s. Skies were relatively clear allowing for good nutlet development.

Stormy conditions moved in over the weekend yielding in excess of 2 inches of rain in most parts of the valley. High winds were monitored between 20 to 25 miles per hour on Saturday with gusts reported over 30 miles per hour and with observers in the area reporting isolated winds well over 40 miles per hour. Overnight lows in the mid 40s gave way to afternoon highs in the mid 60s each day. In spite of the wet and windy conditions tree loss due to blowovers was sparse. Drier conditions prior to the storm helped the trees stay anchored into the soil.

No petals remain on any varieties in the northern region. Nutlets are beginning to emerge from their protective jackets in most varieties. The later blooming Butte and Padre have yet to show emerging nutlets, though that should change this week. Leaves are appearing in all orchards and trees have begun pulling nutrients and moisture from the soil. It is too early to predict potential crop size as non-viable nutlets have not begun to shed in any orchards.

With stormy weather predicted for the coming weeks, growers were busy making their second fungicide treatments prior to the wet weather. Fertilizer applications have already been made to support the developing crop. Excess vegetation has been mowed down low to the ground in order to regulate the orchard temperature in case of a freeze. Beekeepers continue to remove hives from orchards and will continue to do so in the coming weeks.

Wet, stormy conditions returned to the central region during the first days of March as the onset of a series of weather systems passed over the region. Beginning with relatively clear skies and low temps in the 40s, cloudy conditions and the warm nature of the storm brought minimum readings into the 50s in all areas. Following the same trend, daily high readings dropped from the low to mid 70s into the low to mid 60s under the dark, stormy skies. 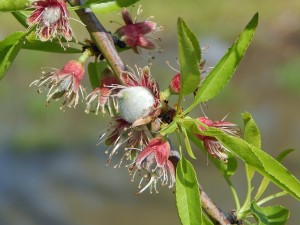 Nutlet development in a Butte variety.

Strong winds accompanied the storm’s passage, with sustained speeds from 15 to 25 mph and gusts reaching in excess of 30 mph. Reported rainfall totals ranged from 0.6 inch to just over 2.0 inches.

Crop development continues in the northern San Joaquin Valley, as orchards are now devoid of petals, assisted by the brisk winds and rain over the past few days. As a result, trees are becoming increasingly green as the leaves continue to expand. The nutlets of nearly all varieties are continuing to grow within and emerging from their protective jackets.

In addition to mowing excessive vegetation on the orchard floor, growers spent the days prior to the storm’s arrival spreading fertilizer materials and completing fungicide applications. Forecasts of an extended wet period during this critical phase of development has growers concerned about the prospects of fungal infections on the developing crop as well as on the orchard foliage. Beekeepers were also busy removing hives from the orchards ahead of the storms. Hive removal will continue for several weeks. 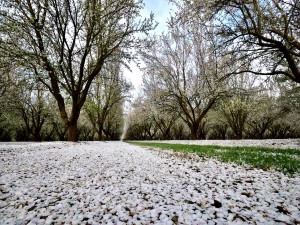 Petal fall in a Butte and Padre orchard

The first weekend in March received significant precipitation as the initial phase in a series of storms passed through the southern region. Temperatures at the beginning of the week reached the low 80s and allowed the crop to begin sizing nicely. The clear skies and warm temperatures gave way to cloud cover and windy conditions with daytime highs dropping into the upper 60s as the weekend storm approached.

Observers reported steady winds between 5 and 10 mph, with gusts above 20 mph throughout the weekend. Rainfall totals ranged between 1.5 inches to nearly 3 inches in Fresno County, with the majority of rain received Saturday and Sunday evenings. In contrast, southern Tulare and Kern Counties received minimal amounts of precipitation, with observers reporting that they received up to three quarters of an inch in the wettest locations.

The crop in the southern region continues to mature. Nutlet development has been progressing steadily. Sonora and Avalon nutlets are beginning to break through their protective jackets. The Nonpareil variety is beginning to size, followed closely by the various pollenizer varieties which are still wrapped within their jackets.

Prior to the storm’s arrival, growers were busy making fertilizer and fungicide applications. With more rain on the horizon, growers are doing everything they can to prevent fungal infections on the developing crop. As illustrated in today’s photos, growers turned to aerial applications where necessary. Beekeepers were seen collecting hives before the wet weather and will continue throughout the month as fields become more accessible.

The next scheduled report will be posted on Monday, March 21, 2016. In the event of any significant occurrences prior to that date, this site will be updated as soon as possible.