This report covers conditions and observations made between Monday, March 21 and Sunday, April 3, 2016.

The completion of the previous period’s stormy weather delivered as much as two-tenths of an inch of rainfall to the Sacramento Valley on the period’s opening day before giving way to dry, warming conditions. Daily maximum temperatures reached into the mid and upper 70’s by the end of the period’s first week, rising from the lower 60’s reported on the period’s opening days. Readings moderated back into the 60’s with the arrival of a weak weather system on the 28th, the rebounded back into the mid 70’s for the balance of the period. Morning low temperatures varied widely, dipping into the upper 30’s on the coldest mornings, but remaining within the mid 40’s to lower 50’s for most of the period. 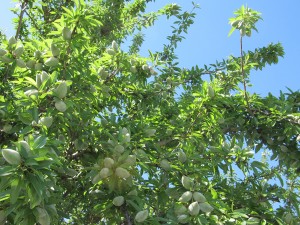 Sonora in the Durham area of Butte County.

Orchards in the Sacramento Valley are displaying full canopies of vibrant green leaves and rapidly sizing almonds, benefiting from the generally good weather conditions the region has experienced this year. With virtually no threat of frost and very little inclement weather, growth rates have been brisk and nuts are sizing rapidly. Growers along the west side of the valley drawing water from the Glenn- Colusa Irrigation District are receiving 100% of their contracted amount this year. Unlike growers in the San Joaquin Valley, where the federal Central Valley Project has allocated 5% of their contracted amounts, growers north of the San Joaquin Delta are benefiting from the lack of “trans-delta conveyance issues” and will receive full allocations of water this year.

Growers have been mowing vegetation within the orchards and applying fertilizer materials as needed to support the developing crop. The lack of frost this year has meant that growers have not had to repeatedly run their irrigation systems to prevent crop losses. As a result, soils are not water-logged and orchards are in very good condition.  Observers are reporting that the trees have begun the normal process of shedding nuts that they are not able to carry to maturity.  Growers are reporting variable crop sets in the Nonpareil and better crop loads within the pollenizer varieties.

Growers are monitoring their orchards closely for signs of Leaf-Footed Plant Bugs and web spinning spider mites. Significant attention is also being paid to Navel Orange Worm (NOW) this year. Following the significant losses attributed to NOW in the 2015 crop, growers are especially tuned into this perennial insect pest. Growers worked through the winter months to remove mummy nuts harboring over-wintering larvae and are now monitoring populations within the orchards using egg traps to keep an eye on egg laying by female moths, and pheromone traps used to monitor the number and activity of male moths. Efforts to reduce the amount of damage experienced in the 2015 crop will continue throughout the 2016 growing season. In the meantime, growers will continue to irrigate and fertilize their orchards as required. 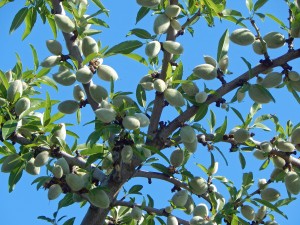 Strong nut set of the Fritz

Days of rain in the previous period carried into the last two weeks of March in the northern San Joaquin Valley. Rain fell on the opening day of the period and again briefly on the 28th, providing as much as 0.15 inch of moisture. Daily maximum temperatures generally varied from the mid and upper 60’s to the upper 70’s. However, readings did drop into the low 60’s on the 28th when a weakening system brought light sprinkles to the northern areas of the region. Morning lows exhibited a bit more variability. Readings were widely reported in the 40’s. However, temperatures dipped into the mid 30’s on the 29th and 30th, providing a bit of concern for the possibility of frost.

Observers are reporting that the crop is developing strongly, under the influence of the generally good conditions. The rain the region has received this year has failed to produce significant threat of disease and growers are reporting that the orchards are in good condition. Growers spent much of the period controlling excessive weed growth and fertilizing to support the developing crop. While pheromone traps have been set in the orchards to monitor life stages of Peach Twig Borer, growers and Pest Control Advisors are walking orchards several times a week in search of Leaf-Footed Plant Bugs. No pheromone traps are available for this potentially serious pest, requiring that growers manually monitor the orchards to prevent significant losses.

Some growers with orchards on sandy soils, who have private wells have begun their first irrigation’s of the 2016 season. However, most are awaiting the start of water deliveries from their local irrigation districts. While the drought officially continues to impact the state, enough rain and snow has fallen in the Sierra Nevada watershed to allow the Oakdale, South San Joaquin, Modesto, Turlock and Merced Irrigation Districts to provide ample allocations of 3 to 4 acre-feet of water to their growers. The South San Joaquin Irrigation District began filling their distribution system during the last week of March, while the remaining east side districts will begin deliveries during the first week of April.

Producers receiving their water from the State Water Project along the west side of the valley have been allocated 45% of their contracted amounts. West side growers receiving water from the federal Central Valley Project face a much grimmer situation, with allocations of 5% of contracted amounts.  Demonstrating the complicated dynamics of the water situation in the San Joaquin, west side growers with the areas served by a group of irrigation districts knows as the exchange contractors, the Central California Irrigation District, the San Luis Canal Company, the Firebaugh Canal Water District and the Columbia Canal Company, all of whom serve growers between Newman and Mendota along the west side, will receive 100% of their contracted amounts.

As shown in the accompanying photo, observers have reported that the trees are beginning to shed nuts that they are unable to carry to harvest. Growers are reporting a high degree of variability in the apparent crop set from orchard to orchard. Many are reporting the greatest variation in the Nonpareil. 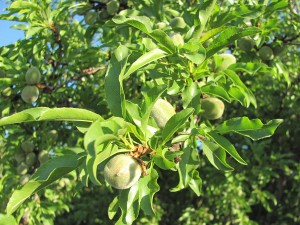 Close-up of the Padre near Madera.

Mild to warm temperatures dominated the southern San Joaquin’s weather during the last weeks of March. Daily maximum temperatures climbed gradually during the period’s first week, rising from the lower 60’s as the previous period’s showers exited the valley. Readings reached into the upper 70’s by March 27th, then dipped back to the lower 60’s with the arrival of a dying weather system that dropped a few hundredths of an inch of rain in some areas. Temperatures then resumed the previous week’s warming trend, reaching back into the upper 70’s by the end of the period. Morning low temperatures were reported predominately in the 40’s during the period, with readings dipping into the mid 30’s in the coldest locations on the morning of March 29th.

The warm daytime and mild nighttime temperatures have provided good support of the developing crop in the southern San Joaquin Valley. The absence of damaging frosts and hail storms this year made March a relatively restful period and observers are reporting that nuts of all varieties are developing rapidly and sizing well. With water deliveries now available from several local irrigation districts, growers have begun the 2016 irrigating season, using surface water where available and groundwater as needed to support the orchards.

The federal Bureau of Reclamation has announced that water districts receiving their water from the Central Valley Project will receive 5% of their contracted amounts. Growers along the east side of the region, receiving their water from Lake Millerton near Fresno have been allocated 30% of their contracted amounts. Greatest surface water availability is found in the area served by a collection of west side water districts known as the Exchange Contractors. This includes the Central California Irrigation District, the San Luis Canal Company, the Firebaugh Canal Water District and the Columbia Canal Company, who serve growers as far south as Mendota in western Fresno County.  Outside of these Districts, many growers in the southern region will once again be dependent on groundwater drawn from their own wells.

Observers are reporting findings of Leaf-Footed Plant Bugs in orchards along the eastern foothills. This aggressive insect can cause significant losses by feeding on the developing nuts and prefers the Sonora, Aldrich and Fritz varieties. Growers and their advisors have been monitoring orchards closely over the past two weeks and some treatments have been required to control growing populations. Monitoring for the insect will continue until the nut’s shells harden enough to prevent penetration by the insect. Growers are also monitoring for signs of web spinning spider mites, as well as populations of predator and parasitic species, hoping that the “good insects” will be able to mitigate the need for treatments to control damaging populations later in the season.

Growers have been managing weed growth within their orchards and tying trees to support the weight of the developing crop. Weed management, fertilization and irrigation will continue in the coming weeks as temperatures rise and growers work to support their orchards.

The next scheduled report will be posted on Monday, May 2, 2016.