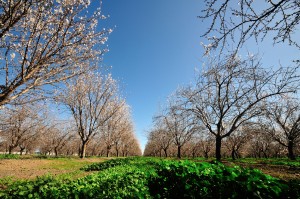 This report covers conditions and observations made on Monday, February 17, 2014. 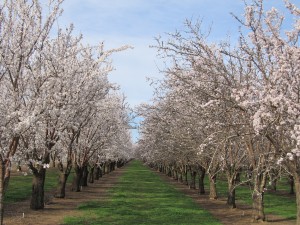 View down the rows of the Aldrich and Price almond tree varieties in the Durham area of Butte County, California.

Generally good weather covered the growing region throughout the day on Monday. Daytime highs through most of the region were in the mid 60’s. The bright skies and calm conditions provided ample support for the bees’ efforts during the day, providing for 6 to 8 hours of very good activity.

In the Sacramento Valley, we normally report that the Sonora variety is leading the region’s bloom, in reality, the comparatively small amount of Winters also stands out as an early blooming cultivar. The Winters tends to push its leaves early in the bloom and as a result is the first variety to lose its petals and transform into a vibrant green. By comparison, the Sonora, on average, is now at or near its peak bloom, with advanced plantings now moving well into the petal fall and jacket stages.

As with orchards in the San Joaquin Valley, California types are leading the Nonpareil through the bloom and both groups are beginning to shed petals from the trees. Around the region, the late blooming Butte and Padre plantings, the last to begin the transition from the dull brown of the dormant season are beginning to present the first of their flowers for pollination.

The bloom in the central region continues to push ahead strongly. Many of the early blooming Sonora have now moved beyond their peak bloom. The Sonora’s habit of retaining its petals past viability translates into a greater apparent amount of bloom in the orchards. However, closer examination of the flowers reveals that they are no longer viable and must be moved into the petal fall column in the table below. The balance of the region’s varieties have also made a strong charge ahead in recent days. California types remain ahead of the Nonpareil in all orchards around the region, led for the most part by the Price. Both the Nonpareil and the California types now have the majority of their buds in the popcorn and bloom stages and are poised to move quickly through the bloom. Carmel and Monterey trail the Nonpareil this year, but lead the Butte, which is now moving into bloom. 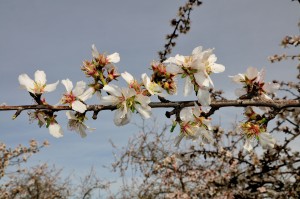 Almond blossom for the Sonora variety.

The bloom in the southern San Joaquin is pushing ahead strongly, with rapid movement through the various stages of development. The early blooming Sonora is now at or near its peak bloom, with advanced examples now moving rapidly into petal fall. The California varieties, which now have the majority of their flowers open and available to the bees, are leading the Nonpareil, with advanced examples of both groups also beginning to shed petals to the ground. The Monterey and Carmel are progressing well from the pink tip and pop corn stages into bloom and lead the Butte and Padre, which are now presenting the first of their flowers for pollination.

Each day brings more discussion of the variation evident in the 2014 bloom. Some growers have noted that they have orchards of the same variety literally across the road from one another that can range from 5% to 50% bloom. Nevertheless, the overlap between varieties within any orchard is more than adequate to provide good pollination opportunities.

In the Southern part of the region observers are reporting that the variation from orchard to orchard within any variety can be quite dramatic, the overlap between varieties within virtually all orchards remains quite good. However, some have reported that a number of Butte and Padre orchards are not as well synchronized as the balance of the region’s plantings. Throughout all varieties, plantings along the west side of the southern San Joaquin remain ahead of those in the balance of the region.