This report covers conditions and observations made between Monday, June 29 and Sunday, August 2, 2015. The next report is scheduled for Monday, August 31, 2015. However, in the event of any significant occurrences prior to that date, this site will be updated as soon as possible.

Temperatures varied widely during July, with warm to hot conditions dominating the majority of the period. Daily maximum readings were in the mid and upper 90’s as the period began and briefly dropped into the upper 70’s and lower 80’s within a few days. However, conditions warmed steadily for the balance of the month, with readings reaching to as high as 109 degrees during the final week of July. While morning low temperatures exhibited more stability, readings remained at relatively warm levels, predominately in the lower 60’s to lower 70’s. 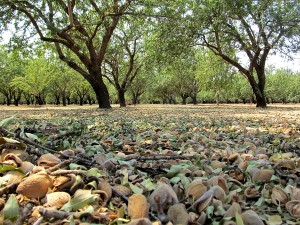 Harvest operations have begun in the Sacramento Valley. However, only a few orchards have been shaken, swept and picked up as this report was being written and observers are reporting that shaking will begin in earnest during the this week. The varying temperatures during the month affected the pace of development, and while growers had anticipated starting shaking operations at the earliest date in history, the very hot conditions actually worked to slow things down a bit. The maturation process that drives the hull split requires adequate moisture levels within the tissue. Stresses promoted by the elevated temperatures actually reduced the pace of development, resulting in a start of the harvest more in line with that of the 2014 almond crop.

Growers spent the past month preparing for the harvest. Irrigation, weed control and pest management have dominated the growers’ activities, with special attention going to the control of Navel Orange Worm, NOW. Trap counts have been running at high levels throughout the growing season and growers have been on equally high alert for the potential of damage to the crop. Poor mummy shaking conditions during the past winter has meant that most growers have made multiple treatments to secure adequate control. Whether their efforts have been successful will become known over the coming weeks as the crop emerges from the region’s hullers and shellers.

Growers in the Sacramento Valley have been more optimistic about the potential of their crops than those under greater water restrictions prevalent in the San Joaquin Valley. All in the region will be watching crop weights closely as the harvest gets underway in an effort to confirm production levels.

Temperatures varied widely during July, with significant heat waves impacting the orchards during the first days of the month and again during the transition into August. Daily maximum temperatures reached above the century mark during these hotter periods, increasing stress levels and the moisture demand by the crop. In between these uncomfortable periods, highest readings were reported at more comfortable, but warm levels, with readings ranging between the lower 80’s and mid 90’s. Morning minimum readings during the period also remained at relatively warm levels, ranging between the upper 50’s and lower 70’s. 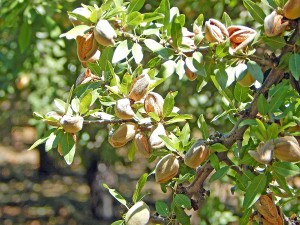 Hull split of the Nonpareil almond.

Aside from the hot conditions, the most significant factor in the period’s weather was contributed by monsoonal moisture flowing northward from tropical storms over Mexico. Elevated humidity levels made for uncomfortable conditions while thunderstorms produced sporadic showers that dropped trace amounts of rain in isolated areas of the region.

Harvest operations have begun in the Northern region. Shakers were sent into the first of the region’s orchards along the I-5 corridor during mid-July, with shaking operations starting along the eastern foothills during the final week of the period. Only a few orchards have been picked up as this report was being prepared and observers are reporting that harvest operations in all areas of the region will be going strong during the first ten days of August.

Growers spent the month of July preparing for the harvest and working to meet their orchards moisture needs. Special consideration has been given to hull split treatments for Navel Orange Worm, NOW, this year. As has been noted in previous reports, growers and Pest Control Advisors have reported very high trap counts of this serious insect pest throughout the growing season. The combination of poor mummy shaking conditions due to the dry winter and elevated temperatures during the growing season have resulted in a significant population of moths within the region’s orchards. Growers have made two, and in some case three treatments, to control the pest and hopefully prevent damage to the crop. Growers have also noted problems with hull rot, produced by the elevated humidity levels and have opted to include treatments for the fungal organisms causing the problems with the treatments for NOW. While fungal growth on the hulls is not a serious problem by itself, the organism produces toxins that attack wood and can significantly impact crop production in subsequent years.

Water remains a focal point for all in the region. Heavy rain falling from thunderstorms within the Sierra Nevada watershed produced enough water to allow the Merced Irrigation District to release 0.4 acre/inch of water to its growers. While this may seem insignificant, it did provide some growers with an opportunity accumulate water from the various lands they own, and provide their orchards with an irrigation without using groundwater. Water will be available to growers within the Modesto and Turlock Irrigation Districts until early October. Growers there have effectively rationed their supplies of surface water, balancing availability with water drawn from their wells to meet the needs of their orchards. However, deficit irrigation remains the norm and orchards under significant stress can be observed in all areas of the region. Damage from water stress and excessive salinity and/or pH has impacted tree growth, thereby impacting the current crop and potentially, crops to follow.

Hot and humid conditions dominated the weather in the southern region during July, providing uncomfortable working conditions and increasing stress on the region’s orchards. Daily maximum temperatures, which dipped below the 90 degree mark for only a few days during the period, on the 9th and 10th of the month, reached well over the century mark on several days, with highest readings report during the last week of July. Morning lows followed a similar trend, with readings reported in the lower 60’s to lower 70’s throughout the period. Adding to the temperatures, the high humidity levels created by monsoonal moisture cast off of tropical storms over Mexico made the temperatures seem even higher. The instability accompanying the moisture produced thunderstorms on several days during the period, with isolated areas of the region receiving as much as an inch of rain from the heaviest downpours. While the storms made growers nervous, no lasting impact on the crop has been reported. 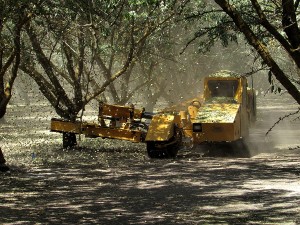 A shaker removes almonds from a tree in Central California.

Harvest operations are now well underway in the Southern San Joaquin Valley. Growers sent shakers into the most advanced plantings along the west side of the region during mid-July, with operations beginning in the balance of the region in the closing days of the period. Growers have reported differential maturity within the trees in many plantings, with nuts at the tops of the trees and the ends of the branches being dryer and ready for harvest, while those deeper within the tree canopy being “greener” and harder to shake. While loads of in-hull almonds have been received from the earliest orchards by the huller/shellers, most have chosen to accumulate enough product to justify starting the hulling/shelling season. Only a few loads of shelled almonds have been received as this report was being prepared. We anticipate the start of “full-blown” harvest operations beginning this week.

Preparations for the harvest dominated growers’ work during the period, with irrigation and pest management being the prime activities. Observers are reporting that many orchards around the region are exhibiting signs of severe water stress, along with the affects of poor quality water. Wilted trees, salt damage and premature defoliation are very evident, particularly in Madera County. Adding to the problem, a number of orchards have seen rising populations of web spinning mites, which have benefitted from the stresses imposed on the trees, aggravating the degree of defoliation in the impacted orchards. 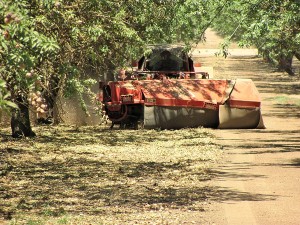 A sweeper prepares an Almond orchard for harvest in the Chowchilla area of Madera County in California.

Efforts to manage Navel Orange Worm, NOW, populations within the orchards also intensified during the period. Traps counts, in both egg traps used to monitor females and pheromone traps, used to monitor males, have been running very high throughout the year. University research has shown that orchard sanitation, removing mummy nuts remaining in the trees after harvest to reduce the number of over-wintering insects in the orchards, is the best way to manage NOW and reduce damage to the crop. Unfortunately, the dry winter conditions have translated into very poor mummy shaking conditions and over-wintering populations have been quite high. As a result, the only opportunity to control this serious pest is with treatments timed at hull split, intended to control the larvae before they enter the nut.

Observers are reporting that with the Nonpareil harvest now underway, the balance of the region’s varieties are progressing rapidly, no doubt driven by the stresses on the trees. As a result, it appears that the harvest has a high possibility of being very compressed, with pollenizer varieties harvesting immediately after the Nonpareil.