This report covers conditions and observations made between Monday, August 3 and Sunday, August 30, 2015. The next report is scheduled for Monday, October 5, 2015. However, in the event of any significant occurrences prior to that date, this site will be updated as soon as possible. 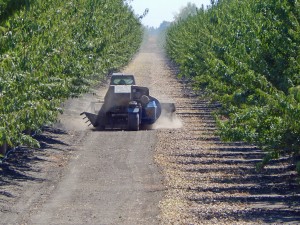 A sweeper preparing the almond crop to be picked up, both in the Arbuckle area of Colusa County.

While not exactly cool, almond growers in the northern region enjoyed milder conditions than those farther to the south in the San Joaquin Valley. Daily maximum temperatures ranged between the upper 80’s and mid 90’s, with readings rising above the century mark only briefly at mid-month and again during the period’s final week. Morning minimum readings were also reported at mild levels, ranging predominately between the upper 50’s and mid 60’s throughout the period.

Harvest operations are at “full throttle” in the Sacramento Valley. Growers with advanced plantings have already completed harvest of their Nonpareil and have moved on to the pollenizers, in many cases not pausing to irrigate prior to shaking the next variety. Growers are reporting the best yields along the west side of the valley, with many reporting better crops than experienced in 2014. Meanwhile, growers in the Chico area of Butte County are reporting more mixed results, with yields there varying from orchard to orchard.

Growers in all areas are expressing the greatest degree of concern over reject levels they have observed in the crop thus far. Excessive damage levels caused by Navel Orange Worm (NOW) can be found in many areas of the region, with extreme levels in the teens noted in the most egregious examples. Grower are also concerned that the life cycle timing of the insect may place the 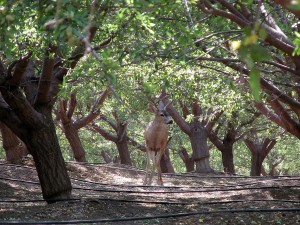 A “local native” passing though an orchard in the Maxwell area of Colusa County.

balance of the region’s varieties at risk for damage and are hoping to get the pollenizers on the ground before the moths can lay their eggs on the nuts.

The almond crop is being rapidly transported to huller/sheller facilities and to stockpiles for processing after the harvest operations have been completed in the fields. Huller/sheller operators are reporting that the crop is being processed very quickly through their facilities, leading many to predict an early completion of harvest this year.

Warm, dry conditions dominated the weather in the northern San Joaquin Valley during August, providing ample opportunities for almond growers harvesting the 2015 crop. Daytime high temperatures were reported at their lowest values early in the period, with temperatures rising from the mid and upper 80’s during the first week of the month. Temperatures then took on a cyclic pattern, peaking at mid-month at just over 100 degrees, then cooling into the upper 80’s before rising back above the century mark in the final week the period. Morning minimum temperatures exhibited a greater degree of stability, varying between the mid 50’s to mid 60’s throughout the period. 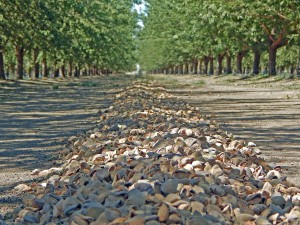 Nonpareil almonds waiting to be removed from the orchard.

Harvest operations are progressing rapidly in the northern San Joaquin Valley, benefitting from the warm, dry conditions that dominated the weather over the past month. A significant number of growers have completed the harvest of the Nonpareil variety and have begun shaking their various pollenizer varieties. Some growers are reporting difficulties with uneven maturity within the trees. This has produced situations where nuts at the ends of the branches are too dry, while those deeper within the canopy are too green, producing difficult shaking conditions, leaving nuts remaining in the trees after shaking. Even as some growers battle with the uneven maturity of the Nonpareil, the advanced nature of the pollenizers in many plantings has spurred growers to begin shaking their second varieties without pausing to irrigate. As this report was being prepared, many Carmel, California type varieties, Butte, Padre and even a few Monterey plantings have already been shaken.

Growers throughout the region are reporting Nonpareil yields below expected levels. Weights of truckloads coming from the fields are running lower than normal, as are the yield levels of finished kernels produced from each truckload. Greatest impacts are observed in the southern areas of the region, although growers in all areas have reported reduced production levels.

Quality levels have also been impacted this year, primarily due to infestations of NOW, and to a lesser degree damage caused by ants. As has been reported all year long, growers and Pest Control Advisors have been monitoring elevated trap counts of NOW in the region’s orchards. Poor mummy shaking conditions resulting from the dry winter weather has produced higher than normal populations of adult NOW moths in the orchards. Unfortunately, a large number of growers are now reporting excessive reject losses as a result of the feeding of NOW larvae on the Nonpareil and are concerned that the life cycle timing of the insect may put their other varieties at risk, as well.

While growers in the central region generally have more water available for irrigation than those in the southern San Joaquin, orchards under water stress can still be easily found in many areas of the region. As growers withhold water from their orchards during the harvest, plantings with the lowest amount of moisture deep in the root profile are the first to show signs of stress; wilting and defoliating in the most extreme cases.

Following a short time of moderate conditions in the period’s opening days, warm to hot temperatures dominated the weather in the southern region during August. Daily maximum temperatures ranged predominately between the low to mid 90’s and just over 100 degrees for the majority of the period, with warmest temperatures reaching as high as 105 degrees. Meanwhile, morning lows were widely reported in the upper 50’s to mid 60’s throughout the period. 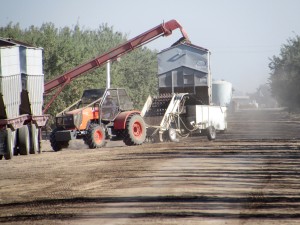 Loading operations in the Delano area of Kern County.

The 2015 harvest is progressing at a feverish pace in the southern San Joaquin Valley. Harvest of the Nonpareil is nearing completion as this report is being prepared, with many growers already well into the pollenizer varieties. Observers have noted that a number of plantings of the last to harvest Monterey and Fritz have already been shaken, with a few of the most advanced examples already picked up and delivered to the sheller for stockpiling. As a result of the accelerated pace thus far, some growers are predicting that they will complete their harvest by the end of September.

Observers have also noted significant signs of water stress, as may be seen in the photo accompanying this report. Stresses produced by the lack of water and by poor quality water can both be easily observed in all areas of the region. However, the greatest degree of difficulty appears to reside in the Madera County area, south of Chowchilla. Leaves burnt by excessive salinity and defoliating orchards produced by a lack of water can be found in many locations. 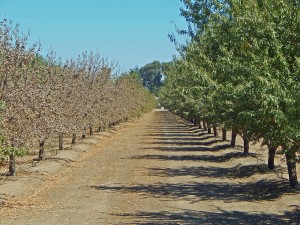 This image of an orchard in the San Joaquin Delta where the saline water drawn from the San Joaquin River has started to burn the leaves on the Monterey variety. Note that the adjoining Nonpareil variety is not showing adverse symptoms.

These stresses have conspired to produce disappointing crop yields for many in the region. While forecasts had called for yields below last year’s levels, many growers are reporting production below expectations. Compounding the difficulties, many are also reporting elevated reject levels produced by NOW. Growers and Pest Control Advisors have been monitoring orchards closely all year long and have noted high trap counts of the adult moths in many plantings. Unfortunately, the high counts have translated into excessive losses in the harvested crop in spite of the growers’ best efforts to control the pest.

Stockpiles of almonds can be found in all areas of the region as growers bring the crop in from the orchards. These piles will be brought in for hulling and shelling after harvest operations in the fields have been completed and capacity at the huller/shellers becomes available.