This report covers conditions and observations made between Monday, July 31 and Sunday, September 3, 2017. The next scheduled report will be posted on Monday, October 2, 2017. However, in the event of any significant occurrences prior to that date, this site will be updated as soon as possible.

As with July, waves of heat typified much of the month of August throughout the Central Valley. Daily maximum temperatures surpassed the 100-degree mark in the in the period’s opening days, as well as in the final week of the month, when readings reached their highest levels, as high as 110 degrees in many areas. For the balance of the month, temperatures were only slightly more comfortable, with readings reported predominately in the lower and middle 90’s. Meanwhile, while morning low temperature dipped into the lower to middle 60’s during the “cooler” days, readings dropped only into the mid 70’s during the days with highest maximum temperatures. And just to make things a little more strenuous, forest fires in southern Oregon and the Sierra Nevada mountains filled the valley with smoke, reducing visibility to as low as 5 miles. 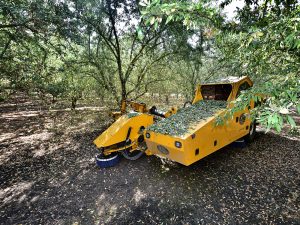 While the weather was hot, it was not necessarily dry. The high-pressure system that created the oppressive heat also spun monsoonal moisture over the eastern edges of the Central Valley, creating light scattered showers on several days, dropping trace amounts of moisture, and increasing humidity levels, particularly in the Sacramento Valley. However, a significant thunderstorm passed through areas of Kern County in the closing hours of the period, on the evening of Sunday, September 3. This cell dropped as much as ½ inch of rain in the wettest locations and was accompanied by very strong winds, reaching over 40 mph. Several growers reported trees being blown-over and nuts knocked to the ground.

The hot temperatures have created numerous problems for growers in all areas of the Central Valley. Harvest operations throughout the valley have reached a fever pitch as growers move through the early harvesting Nonpareil and Independence varieties. Growers, their employees and custom operators are moving as quickly as possible, working to shake, sweep and pickup these early harvesting types, under the pressure of rapidly maturing pollenizer varieties. 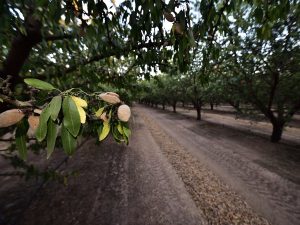 As noted in last month’s report, the hot conditions endured during July created difficult conditions for growers and Pest Control Advisors (PCA) as they worked to manage Navel Orange Worm (NOW) populations. Last month’s high temperatures promoted an extended hull split, complicating treatment decisions as growers and their advisors worked to protect the crop. Unfortunately, NOW damage has become quite apparent in all areas. Further complicating matters, the current hot conditions pose additional difficulties for later maturing varieties such as the Monterey and Fritz. PCA’s are reporting very high counts in egg traps intended to monitor female moth activity and pheromone traps targeting male moths. Growers are considering their treatment options, trying to balance the need to harvest, irrigate to prevent stress and treat to prevent additional losses. The heat has also increased pressure from web spinning mites in all areas. However, growers in the southern San Joaquin are experiencing the greatest pressure and as may be seen in the photos accompanying this report, some orchards have begun to defoliate.

The prolonged hull split has also resulted in variable maturity within the individual varieties. This has complicating harvest timing. Further, as previously noted, growers in the Sacramento Valley have battled higher humidity levels that have slowed the drying process. Both have resulted “rubbery” or pliable hulls in the product being delivered from the orchards, which has impeded the hulling and shelling process. 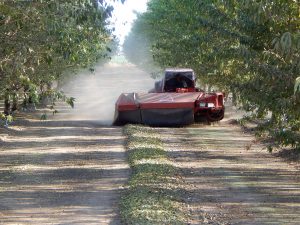 Observers in the San Joaquin Valley have reported that the Independence varieties is nearly out of the orchards and growers are expected to complete picking up the Nonpareil within the first ten days of September. Given their later start, growers in the Sacramento Valley, will take a few days longer to complete the Nonpareil. Meanwhile, growers in the southern San Joaquin have already moved into pollenizer varieties. Huller/sheller operations in the south valley have already received Price, Butte, Padre, Wood Colony and product from advanced plantings of Monterey. Observers are also reporting that hulls on the late maturing Fritz have begun to split.

As is normally the case, the flow of product coming from the orchards outpaces huller/sheller capacity and product is being stockpiled at the orchard and at huller/sheller stockpile yards. These stockpiles will be shelled after field harvest operations have been completed.