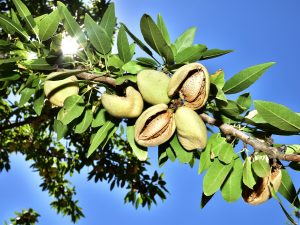 This report covers conditions and observations made between Wednesday July 5 and Sunday, July 30, 2017. The next scheduled report will be posted on Monday, September 4, 2017. However, in the event of any significant occurrences prior to that date, this site will be updated as soon as possible.

Waves of heat highlighted the weather across the Central valley during July, increasing the orchard’s water requirements. Daily maximum temperatures in all areas ranged from the lower 90’s to as high as 108 degrees, with most days at the mid and upper end of the spectrum. Most notably, readings reached their highest values during each weekend of the month. Morning low temperature provide little respite from the daily highs with readings dropping only into the mid 60’s to lower 70’s. 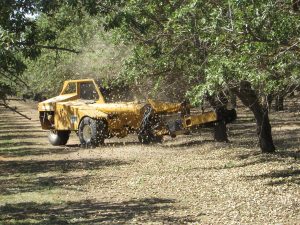 Growers in all areas of the Central Valley spent July preparing for the coming harvest. Hull split treatments to control Navel Orange Worm (NOW), irrigation, ant bait applications and weed control dominated the grower’s activities. Observers have reported a prolonged hull split in the early maturing varieties, influenced by the relatively prolonged bloom period and the high temperatures that dominated the month. Temperatures exert a high degree of influence on plant growth. The mild conditions experienced during the 60 days after bloom have translated into a later harvest than has been experienced in recent years. Excessive temperatures can slow plant growth too. And the high readings reported during July increased stress levels and actually worked to slow the hull split by a few days. This has forced some to make split applications of hull split NOW treatments in order to ensure effective control. Growers and Pest Control Advisors have reported increasing counts in NOW pheromone traps in most areas of the valley. However, correlating trap counts to potential damage levels is difficult as growers and advisors work to understand the effectiveness of the comparatively new pheromone traps. Those in the Kern and Fresno County areas, along with growers in Butte County are also reporting increasing populations of web spinning mites, no doubt promoted by the hot, dry conditions. Fortunately, while some growers have been forced to treat, observers are reporting strong insect predator populations in many areas that can reduce or eliminate the need for treatments which are difficult to complete at this late date. Growers will be monitoring the orchards closely in the coming weeks, hoping to avoid treatments as much as possible. 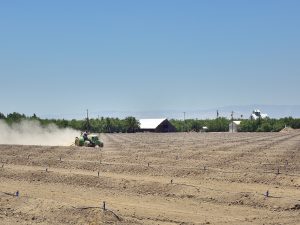 Replacing an orchard. Preparing for the new trees – Modesto, CA

While the high temperatures increase water requirements, they also complicate grower’s irrigation management decisions. Growers normally reduce irrigation to one-half of the trees consumptive use for two weeks at the initiation of hull split in an effort to reduce hull rot infections. However, increased water demands during the hottest days complicate the calculation. Many are also limited by their irrigation district ability to deliver water in a timely manner, resulting in a series of compromises rather than optimum application.

As shown in the photos accompanying this report, observers have reported that shaking operations began in the first orchard on Tuesday, July 25th in Kern County. Several other growers also began shaking their most advance plantings later in the week. However, most growers are reporting that the will not begin continuous shaking operations until the first week of August with many more delating the start of the harvest until the week of August 6th.