This is the final report of the 2017 crop year, covering the conditions and observations made between Monday, October 2, and Sunday, October 29, 2017. The next report will be posted on or about Wednesday, January 31, 2018 prior to the start of the 2018 bloom. 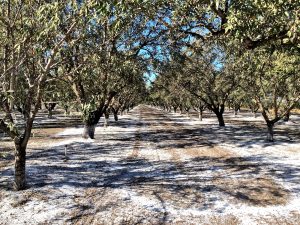 Growers in California’s Central Valley enjoyed mild to warm conditions during much of October, with only brief showers slowing down the harvest. Daily maximum temperatures oscillated between the low to mid 70’s and low to mid 90’s throughout the month, peaking at the upper limit three times during the period. Meanwhile, morning lows were reported predominately in the 40’s in all areas, with warmest mornings dropping only into the lower 50’s. Skies were largely clear and cloud free during the period, except for a brief time from the 19th to the 21st, when a fast-moving weather system passed over the state, dropping from a few hundredths, to as much as a tenth of an inch of rain.

As Brian Noeller, Blue Diamond Regional Manager for southeastern Stanislaus and northern Merced County stated in his monthly report, “the dust has settled, and the loud sounds of harvest have given way to the quiet tones of fall.” Growers throughout the Central Valley spent October wrapping up the 2017 harvest and as this report is being written, field operations are now all but complete, with only a few late maturing orchards remaining to be harvested. Weather during the 2017 harvest provided few serious difficulties. While elevated humidity levels slowed hulling and shelling operations a bit this year, the light rain that fell over much of the Central Valley at mid-month failed to create wide-spread problems. However, growers in the wettest locations did have to wait a few days, to allow the crop to dry before resuming the harvest. 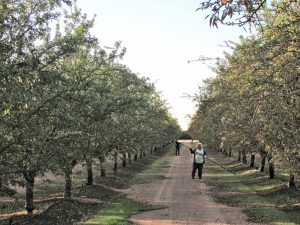 Elevated reject levels caused by Navel Orange Worm (NOW) have continued to plague growers in all areas of the valley. Damage levels sustained in the early harvesting varieties, such as Nonpareil have carried through all susceptible varieties, including the late maturing Fritz and Monterey. This has created significant financial losses for growers with the greatest damage levels and has inspired them to focus attention on orchard sanitation, or mummy shaking, to eliminate the NOW’s over-wintering site. This is normally accomplished during the winter, after rain and days of fog have weakened the nut’s attachment to the tree, allowing growers to re-shake their trees, sweep and then grind the nuts using flail mowers. However, as may be seen in the photo accompanying this report, some growers are not waiting and have sent hand crews into their orchards to knock the mummies to the ground using poles. Everyone in the valley is hoping for another wet winter with ample rainfall. Unfortunately, last year’s deluge prevented quite a few from sending shakers into the orchards and after enduring the damage present in the 2017 crop, some are making extra efforts to ensure that their orchards will be free of all mummy nuts going into the 2018 growing season. The combination of over-wintering larvae coming into the 2017 crop, coupled with the high temperatures experienced in July, which prolonged the hull split resulted in extremely high NOW populations that created significant problems for growers throughout the 2017 harvest.

Many growers are applying soil amendments, such as gypsum or lime to correct soil salinity and pH issues and a number of orchards have already been pruned. Growers are also 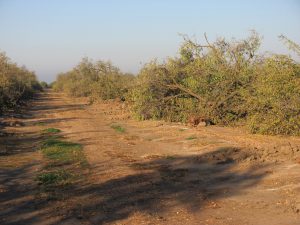 Pushed Out Orchard Near Madera

fertilizing and wrapping up late-season, post-harvest irrigations. Local irrigation districts will soon cease water deliveries for the 2017 season, one in which most growers received full allocations. Officials have announced that the federal Central Valley Project is starting the 2017-18 water year with 8.9 million acre-feet in storage, more than double the amount stored last year. All are hopeful that the upcoming winter will provide ample snowpack and rainfall needed to maintain supplies for irrigation and replenish underground aquifers.

Reflecting the concurrent beginning and end of the crop cycle, growers continue to pull older, low producing orchards even as new orchards using potted trees are being planted. Other fields are being prepared for planting during the upcoming winter dormant season using bare-root trees. All this is occurring as huller/sheller operations work their way through previously stockpiled almonds. Each day brings another huller/sheller operation that has finished running the last of the 2017 crop. However, largest operations around the valley with the most crop to process are expecting to continue their operations until just before the Thanksgiving Holiday.