This report covers conditions and observations made between Monday, September 4 and Sunday, October 1, 2017. The next scheduled report will be posted on Monday, October 30, 2017. However, in the event of any significant occurrences prior to that date, this site will be updated as soon as possible.

Temperature moderated greatly during September, providing both the growers and the orchards with relief from the oppressive heat experienced during August. Daily maximum temperatures, which were reported at the highest levels in the San Joaquin Valley, declined from the mid and upper 90 ’s in the period’s opening days to more comfortable levels in the mid to upper 70’s by the third week of the month. Readings rebounded slightly during the final week of the month, reaching back into the lower 90’s as the period concluded. Morning lows followed a similar trend, dropping from the upper 60’s and lower 70’s to lower 50’s over the same period. 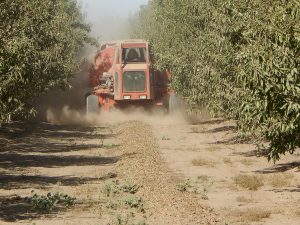 Monsoonal conditions impacted the entire valley’s weather during the month as pulses of moisture passed over the state. Light rain events hindered harvest operations slightly in the southern and central San Joaquin Valley. Greatest amounts of precipitation were reported in Kern and Madera Counties, where as much as ¾ of an inch was reported. While no adverse impacts on the crop were observed, field operations were halted for several days in the wettest locations as growers waited for the crop to dry. Huller sheller operators in all areas, particularly those in the Sacramento Valley have struggled with elevated humidity levels that have hampered the hulling process. Many reported improving conditions in the final days of September, as drying north winds dropped humidity 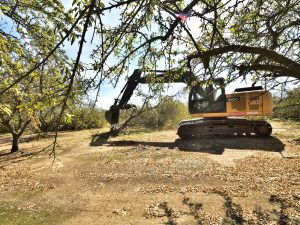 Observers are reporting that harvest operations are progressing well, in spite of the occasionally challenging conditions presented by the higher humidity levels and scattered rain events. As the weather delayed harvest operations within the orchards, huller/sheller operations scarcely missed a beat, and immediately began picking up previously stockpiled almonds.

Throughout the Central Valley, the Nonpareil crop has been removed from the orchards and growers are well into the pollinizer varieties. Carmel, various California type varieties and the Butte and Padre are now being harvested. Shakers have begun moving into the last to harvest Monterey and Fritz varieties in many areas, signaling the approaching end of the 2017 harvest. Several small huller operations have already completed their work for the year. However, harvest operations for most will not be completed until the second or third week of October. Yields in pollinizer varieties are reported as variable. However, growers are reporting that their Carmel and several of the California type plantings have experienced lower yields than in 2016. 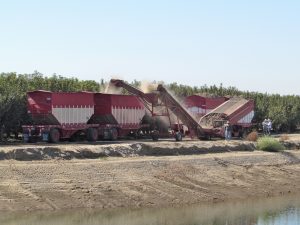 Challenges posed by Navel Orange Worm (NOW) in the Nonpareil continue to plague growers as they move into their pollinizer varieties. Many growers in all areas have endured elevated reject levels caused by NOW. Unfortunately, the damage has not subsided as harvest progresses. Populations of web spinning mites continue to develop in all areas. Impossible to control during the harvest, orchards with the greatest populations have begun to defoliate prematurely.

As growers complete their harvest, other tasks become an immediate focus. Critical post-harvest irrigations, soil amendment and fertilizer applications begin almost immediately after the harvesters leave the orchards. Older, lower producing orchards are being removed even as new plantings using potted trees are being planted, and lands are being prepared for planting with bare-root trees during the coming winter.