The final 2015 California Almond crop ABC Position report was issued on Thursday, August 11th. July shipments of 138.9 million lbs. increased 13% over last year. Year-to-date, shipments closed flat to the prior year at 1.81 billion lbs. As we begin the 2016 crop, the ending inventory of 421 million lbs., combined with the new crop projection of 2.05+ billion lbs. or more, will result in a supply of ~2.5 billion lbs.

After the price corrections from September through December of last year, shipments from January through July exceeded the prior year by 9.3%. Export shipments increased by 19.5% from January through July, while shipments to the U.S. market declined by 7.8%. With a longer supply chain in the U.S., from grower to retail shelf, prices have declined slower than in other markets. As retail prices begin reflecting almond prices of January forward, U.S. demand will begin to grow again.

Both buyers and sellers, in markets around the world, have been cautious about taking large or long positions. The hesitancy on both sides has kept prices trading in a fairly narrow range. Nonpareil kernels have been hovering between $3.25 to $3.00 /lb. depending on the CPO. There will be significant new commitment activity for 2016 crop between now and the end of October, given the amount of business delayed over the last several weeks.

The 2016 crop harvest is under way, with no significant data to report yet. The July NASS data on kernel size and weight being comparable to last year is still the best quantitative data available. 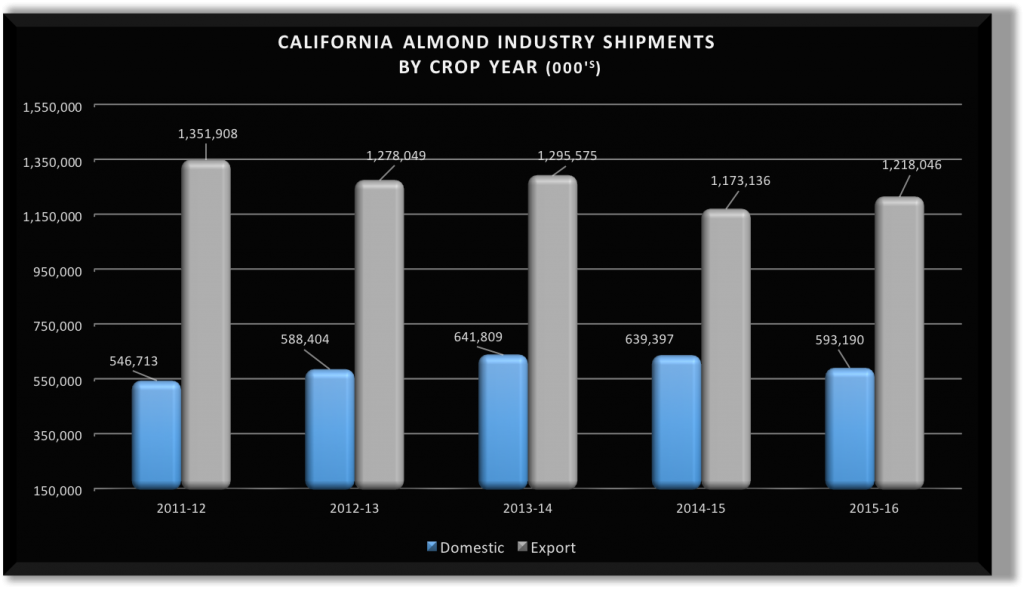