The July Almond Board Position Report serves as the year-end report for the California crop year 2019.  The industry faced strong headwinds this year with trade issues, inconsistency in the NASS Subjective and Objective estimates and most significantly, the COVID-19 impact on the world economy.  Several markets were hit hard with government mandated shutdowns that resulted in large logistical bottlenecks that aggravated a downward pricing trend.  Covid-19 is having a more lasting impact on the food-service and distribution channels, leaving almond buyers to decipher future consumer demand and their resulting needs.  Despite these obstacles worldwide, consumption rose almost 5%, evidence of the resiliency of global almond demand.

Shipments for July were 180.1 million pounds, up from 154.1 million pounds last year.  After extremely trying times in March through May, June and July combined for an 11% increase in shipments over last year bringing year-end shipments for the 2019 crop to 2.372 billion pounds.  The industry carryout ends at 446 million pounds, up from last year’s low ebb of 318 million lbs. 2019 crop commitments are up more than 100 million lbs. and 61% over the prior year, leaving a modest increase in uncommitted inventory. Commitments for new crop stand at 696 million pounds as the harvest begins. Almond handlers, recognizing the large crop on the trees, jumped out to an early booking increase equivalent to twice last year’s commitments. As a result, the new crop is ~24% committed as harvest begins. 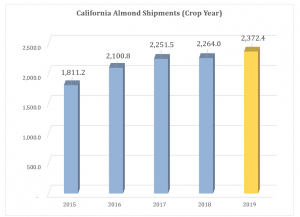 Domestic shipments ended the year up 4.5% and export shipments up 5%. While the U.S. food service industry was hit hard, the domestic market still enjoyed an increase of over 31 million pounds of manufactured shipments, with the almond flour and almond milk categories continuing to grow.

On the export front, India remains the largest export market for California almonds with an increase of 11% over last year with 255.7 million pounds of shipments.  The 2020 crop may enjoy an even larger increase in shipments with affordable prices and demand.  China on the other hand, as a result of high tariffs, ends the crop year below 100 million pounds at 98.5 million pounds.  There remains enormous potential at such time as there is progress in trade issues with China.  Increased demand in China would alter the supply and demand situation quickly.

European markets enjoyed an increase of 6% as this mature market continues to show a slow steady growth year over year.  With the growing popularity of almonds in the EU snacking market, along with the affordable prices, we will again see a mature market enjoy steady growth next year. Middle East markets, driven by UAE and Turkey completed the year up 26%, showing that despite the economic and political turmoil almonds remain a strong part of the local diet and culture for this region.  Japan, Korea and Southeast Asia (minus Vietnam) all show steady demand.

As harvest commences, attention will focus on the quality, sizes, and quantity coming in from the fields.