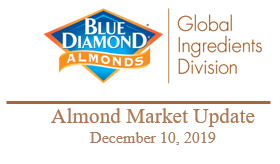 Yesterday, the ABC Position Report for November was released. YTD receipts reached 2.082 billion lbs, 96 million lbs higher than last November YTD. The receipts for the month of November were only 59 million lbs greater than the prior November. With the pace of receipts slowing down substantially in November, it appears that the crop will be close to 2.4 billion lbs even with more almonds to be received December forward than in the past. The erratic nature of 2019 crop yields make this crop more difficult to predict with precision, even at this late juncture, than any previous crop.

At this juncture, YTD demand is more than outpacing growth in supply. Regional shipments are more varied than in recent years with the U.S. off by 4%. Asia-Pacific is down 13% YTD, largely due to a 42 million lb decline in China/Hong Kong/Viet Nam shipments and India slightly trailing last year’s pace. Shipments to Europe are up 16% or 30 million lbs.  Finally, Middle East shipments are up a robust 91% or 50 million lbs through four months.

The significant deviations in early shipments by market demonstrate the value of widespread global demand for California almonds. While regional markets are fluctuating, the overall demand remains very steady. 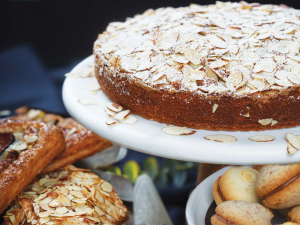