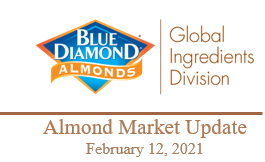 Receipts crested 3 billion lbs, as expected. Over the remainder of the season, they will creep closer to 3.1 billion lbs. The California industry is ~69% shipped and committed against the 2020 supply.

Last year the industry shipped 1.1 billion lbs from February through July. With nearly 2.0 billion lbs in computed inventory at the end of January, continued industry growth of above 10% would get carry-out inventory into the 700 million.

As the 2021 crop bloom begins, expectations are for a smaller crop next year closer to 2.8 billion lbs. The North and Central regions are not expected to repeat their record yields. With a smaller 2021 crop, supply and demand appears more balanced over the next eighteen months. Early bloom weather initially looks relatively moderate across much of the state.