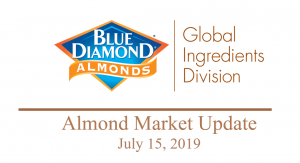 California almond shipments for June 2019 totaled 165.1 million pounds according to the Almond Board’s recent shipment report. This reflects an increase of 5.4% over same time last year for the month of June. Shipments year to date stand at 2.1 billion pounds just above last year’s numbers. The shipment number for June was expected to exceed last year’s shipments and did not disappoint. Receipts remain relatively unchanged at 2.268 billion lbs., well below the 2018 Objective Estimate of 2.45 billion pounds.

Commitments are up over 18% from last year and remaining uncommitted inventory is down almost 29% at 189 million pounds. Supplies were tight through the summer last year and the transition this year will be even more difficult with less available inventory and an expected later harvest. Pollinizers, specifically, are in tight supply and will not be available until mid-October forward. Nonpareil is being exhausted as well.

The Objective Estimate recently announced at 2.2 billion pounds was a surprise for the industry. Expectations for the estimate were more in the 2.45 – 2.55 range. This discrepancy between the Subjective and Objective is the largest we’ve seen. The Objective Estimate is reported by the United States Department of Agriculture, not the almond industry. It’s critical for the industry to have an independent source to report an accurate estimate to set a benchmark for marketing the crop. Historically, this number has been within a workable margin of error. While there are questions regarding the Objective Estimate, this will remain a critical input into marketing the 2019 crop. It will take until November or December for the ABC Position report to provide enough information to more accurately project the actual 2019 crop. This past week we have seen the industry adjust prices, reflecting the 2.2 billion Objective Estimate news. 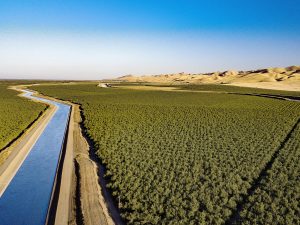 Tariff issues this year have impacted several markets. With one more month left in this crop year we see Turkey down 31% and China down 26% year to date. Turkey has reduced its duties over the last few months compared to 6 months ago. China is always in the trade conversation with speculation, as all are hopeful for good news. With Australian almond supply depleted, it is believed China will again buy from California in the fall for Chinese New Year demand and then pivot to Australian product in the spring and summer with the duty-free advantage. India has shipped a record 217 million pounds and is now the largest export market for California almonds. As the recent modest duty increases in India are expected to have minimal impact, we hope no further actions will arise that could impact the Indian market in a serious way.

North American shipments are relatively flat to last year, but R&D pipelines are full of new potential products as consumer demand for almonds continues to grow. The Middle East/North Africa is up 7% and Europe is 3% down YTD.

Looking ahead, the industry will watch receipt reports through November/December until a clearer picture of the 2019 crop emerges.