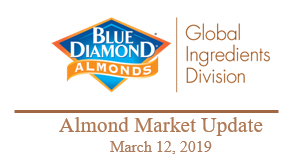 The February Almond Board position report held few surprises. The 2018 Crop harvest stands at 2.262 billion lbs and will finish just north of 2.27 billion lbs, well short of the NASS Objective Estimate. YTD shipments at 1.4 billion lbs remain within 1% of the prior year, with strong U.S. shipments making up for lighter export shipments. February new commitments of 150 million lbs were 34% greater than last year, moving uncommitted inventory to within 2% of prior year.

Everything points to a tight transition out of the 2018 crop, with small and mid-count pollenizer varieties in short supply. While prices on pollenizers firmed earlier this year than last year, the latter part of the year looks similar. Late last year, Nonpareil was being used as a substitute for California varieties to bridge until harvest due to lack of supply on pollenizers. With the cool weather so far, it is possible that the 2019 crop will be harvested a bit later than was the 2018 crop. If so, the transition period will be that much longer.

Price differentials between Nonpareil and pollenizer varieties remain at historical lows for recent years.  The impact of trade uncertainty and tariff issues put early downward pressure on Nonpareil prices. Prices on Cals and Butte/Padres have risen as traditional demand for confectionery, snack and manufactured almonds has been augmented by the growth of the U.S. flour, almond milk and nut butter categories. 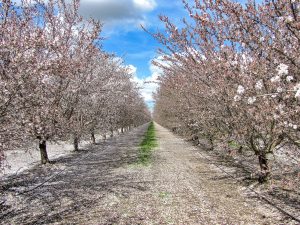 Bloom is all but over in most of California, except for a few Butte and Padre orchards, pollination is finished. All other varieties have lost most of their petals and have no viable flowers left for pollination.

There were numerous challenges during bloom this year with cool and rainy weather, particularly in the Sacramento Valley where conditions were poor. The cooler weather may have kept pollen viable for longer periods giving bees more time to pollinate blossoms, but conditions were less than optimal. According to Blue Diamond’s Field staff, this year did have great overlap within orchards between varieties. All Nonpareil, Monterey, and California type pollenizers bloomed within a day of each other. Padre, while starting a few days behind the Butte, caught up as Butte was reaching its peak, allowing plenty of pollen for both varieties. As tough as the weather made pollination activity, when bees were able to work they had plenty of open flowers on all varieties to forage.