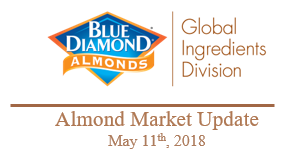 Shipments on the April 2018 ABC Position Report recorded growth of 16.5% over prior year, totaling 176.4 million lbs (including an adjustment to prior YTD). Revised YTD shipments are now 193 million lbs and 12% ahead of last year’s pace.

Allowing for the potential of a larger Objective Estimate of 2.4 billion lbs, even conservative shipment growth next year of 4% would take ending inventory below 300 million lbs for the 2018 crop year. This would equate to less than six weeks of supply for the twelve-week transition period.

Last year the Subjective Estimate was within 3% of the actual crop.