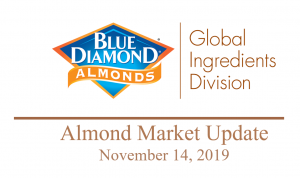 Earlier this week, the ABC Position Report for October was released. YTD receipts reached 1.590 billion lbs., 37 million lbs. higher than last October YTD. The October receipt number is not traditionally very telling as to the size of the entire crop. The Position Report to be issued in early December will reveal much more about the size of the entire crop. Additionally, there was more geographical diversity in yields this year than any in recent memory.  Crop receipts and expectations varied not only from north and south, but east to west.  With Nonpareil receipts closer to finished, and pollinizer receipts less certain, the crop still looks to be near 2.4 billion lbs.

As expected, shipments for October achieved the highest level for any month in California almond industry history at 265.5 million pounds, up 7.4% from last October’s previous record. YTD shipments of 609.5 million lbs. are trending nearly 7% above last year.  All indications point to continued strong shipment numbers in November as well.  YTD comparisons show strong overall demand and shipments, though there is shifting between geographic regions. The U.S. is down 3% YTD, Western Europe up 14%, Middle East up 114%, and Asia/Pacific down 8%.  The Asia/Pacific region continues to be impacted by the China tariff issues, as well as India experiencing an “orphan” year (when Diwali is too early for Aug/Sept shipments and the next Diwali is late enough to draw shipments out of the following crop year).  The “orphan” year will result in a slightly delayed shipment pattern for India. YTD India is down 16%, but strong shipments for October illustrate the market is becoming more active.

New commitments for 2019 crop hit 295 million lbs. in October, resulting in YTD commitments more than 100 million lbs. and 18% greater than last year. If the crop achieves 2.4 billion pounds, it is already 50% committed. Significantly, the supply of pollenizers appears limited relative to demand for the third consecutive year. The Nonpareil supply and demand picture is more closely balanced. As a result, there is again significant compression between pollenizer and Nonpareil pricing. The gap between Nonpareil Supreme and pollenizers is minimal, with an occasional inversion in prices for specific pollinizer needs. The long-term trend for California producers to plant more large count CPO producing varieties (e.g., Monterey, Independence) has resulted in a resurgence in pricing for Butte/Padre, Aldrich, & Fritz.