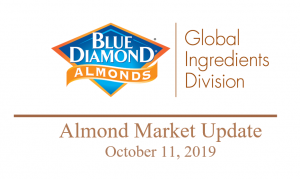 The ABC Position report was issued for September on Thursday of this week. Receipts through September are 839 million lbs., similar to last year’s YTD 833 million lbs.

Widely varying yields throughout California make this a difficult crop to estimate even directionally. Nonpareil receipts in the south are informally reported to be up by 10-20% with receipt results in much of the mid and north state down enough to moderate overall Nonpareil crop expectations to close to last year (892 million lbs.) or up moderately. Pollenizer yields are varying as widely as Nonpareil, resulting in ongoing debate about the crop that will continue until it is mostly hulled and shelled in November, leaving a 2.4 billion crop estimate in play as a working forecast.

The Objective Estimate of 2.2 billion lbs., widely panned throughout the summer as too low, may be closer to the final number than expected. Much of the industry is still operating with a 2.4 billion +/-projection.

September shipments of 196.2 million lbs. were up 16% and 27 million lbs. over last year. YTD shipments through two months are up 6.5% and 20 million lbs. With the small carry-in inventory, upward pricing pressure has existed since late September. Pricing has firmed even more in early October. Demand for pollenizers and the late start to the crop have pushed those prices the most.

In regards to market specifics, shipments to China / Hong Kong are up 59% as buyers in this market contract for earlier Chinese New Year shipments. Shipments need to be arriving by the first half of December in order to make it into the market in time for the festive season. This number is partly tempered by the decrease in shipments to Vietnam and this shipment pattern reflects the current trade routes into China; shipments should be strong again for October and November. India shipments lag as California’s harvest time and an early Divali make it difficult to have product arrive in time for the holiday. Shipments to India are down 22% year to date. As China begins purchasing Australian almonds in early spring due to duty advantages, business with India is anticipated increase, negating the current shortfall.