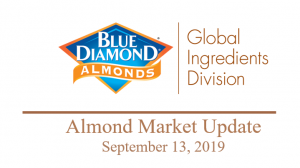 The first Almond Board of California Position Report for the 2019 crop was issued earlier this week.

Receipts in the first weeks of harvest were reported at 200.3 million lbs., 6% ahead of last year despite the later start to harvest in much of the state. Nonpareil receipts in the south are believed to be up by 10-20%. Receipts in much of the mid and north state are down by a similar percentage. With the mixed results to date, it is difficult to see a crop exceeding the 2.4 billion lbs. working projection used by most of California.

The industry ended the 2018 crop with an adjusted carry-out inventory of only 318 million pounds, 41 million pounds less than last year and the lowest number since 2012 crop. The 2019 crop supply will be very close to last year, possibly up by 2-3%.

August shipments were 147.7 million lbs., off by 4% from last August. The change was largely in the U.S., with very little pollinizer volume available at this early juncture. China and India are off to cautious starts, with the EU and Middle East making up some of the slack. Early commitments are up 46 million lbs. and 9% over last August.

With a 2.2 billion lb. Objective Estimate, following the 2.5 billion lb. Subjective Estimate, the market has been trying to find stability.  At the INC in May, the industry was working off the 2.5 billion lb. Subjective and prices adjusted for the anticipation of a crop this size. When the 2.2 billion lb. Objective was announced there was confusion in the market as most in California anticipated a larger crop. Today it appears prices in the industry are calculated against a crop in the vicinity of 2.4 billion pounds. The price adjustment by the industry has already been made with the 2.4 in mind. Early receipt information is showing stronger NP crops in the south by 10-20%. However, as the harvest progresses, and more info comes in from the middle and north state we are not seeing the same results.