One of the almond grower’s best friends “standing guard” in an orchard in Kern County. 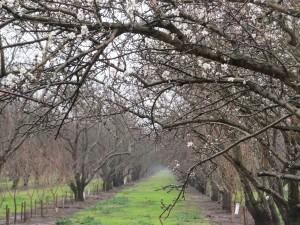 Wet weather made an encore appearance in the Sacramento Valley during the week as the first of a series of storms forecast to last through the coming weekend passed through the region.  Morning lows on Monday, Tuesday and Wednesday morning dropped into the upper 20’s and lower 30’s under clear skies. However, the approaching clouds buffered the morning temperatures on Thursday and Friday, holding readings in the low to mid 40’s in all areas of the region. Daily maximum readings cooled during the period from their greatest values in the mid and upper 50’s as the period began, dropping into the upper 40’s to lower 50’s by Friday afternoon. Official rainfall totals up to Friday morning ranged from 0.4 to 0.6 inch, with growers reporting receiving as much as 0.75 inch. 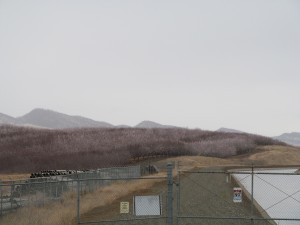 Almond orchards in the northern region of California as the bloom gets underway.

Observers are reporting that the relatively cool temperatures experienced over the past few days has slowed bud development in the region, inhibiting the progression of the bloom up to this point. As shown in the accompanying photos, the greatest amount of bloom is found along the west side of the region, where the Winters, Sonora and several of the California type varieties are leading the Nonpareil. The bloom in the Chico area of Butte County is running well behind that found along the I-5 corridor and only the most advance examples of the Sonora and Peerless varieties are presenting a quantifiable amount of open bloom.

Bee hives placed in the Arbuckle area in Colusa County.

The cold temperatures early in the week, coupled with the advanced stages of bloom along the west side inspired some growers there to send aircraft over their orchards to mix the warmer air overlying the fields with the colder air within the orchards, thus protecting the flowers from damaging temperatures. Observers have noted that growers with susceptible varieties also began disease treatment programs prior to the arrival of the most recent storms. The delivery of hives to the orchards continues in spite of the rain and beekeepers will be busy throughout the weekend bringing hives into the orchards.

Rain has returned to the central region with the arrival of a series of storm systems forecast to pass through the state over the next several days. Morning low temperatures have decreased over the past week, dropping from the mid and upper 30’s early on Monday into the upper 20’s by Wednesday morning. However, the arrival of the first storm system during the overnight hours brought readings back into the 40’s on Thursday and Friday mornings. Daily maximum temperatures have been reported in the 50s’ throughout the week. Total rainfall up to Friday morning ranged from 0.2 to 0.4 inch.

The first open flowers in an advanced Sonora planting.

Bud development continues in the central region under increasingly cloudy skies. Only the most advanced examples of the Sonora and Avalon varieties are presenting open flowers at this time, with these orchards located on the west side of the region along the I-5 corridor. Individual rows of these early blooming varieties are exhibiting a scattering of open flowers, with the earliest plantings showing 5% to 15% bloom. As shown in the photos accompanying this report, Nonpareil and the California type varieties are progressing through the green tip stage, with advanced plantings showing a significant proportion of their buds in the pink stage. Moving eastward across the region, the bloom is running behind that found along the west side, with observers reporting only an occasional open flower visible in the Sonora. 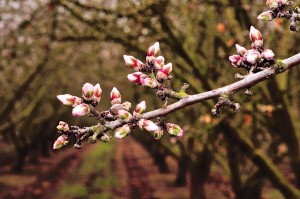 Nonpareil and California type almond varieties are progressing through the green tip stage, with advanced plantings showing a significant proportion of their buds in the pink stage.

Following a brief respite, cloudy skies returned to the southern San Joaquin Valley, bringing additional rainfall to the parched orchards. Morning low temperatures were reported predominately in the 30’s during the period, with readings dropping only into the lower 40’s on Thursday and Friday morning as the approaching storm system moved over the valley. Meanwhile, daily maximums were reported uniformly in the 50’s across the region. Official rainfall amounts varied widely, with areas along the west side of Fresno County reporting as much as 0.5 inch by Friday morning. While official totals were much lower in other areas of the region, generally less than 0.2 inch, some growers reported receiving nearly an inch of rain in the Madera County area. Additional rainfall was sweeping across the region as this report was being prepared. Observers are reporting that the soil was easily absorbing the rainfall in all but the heaviest soils. 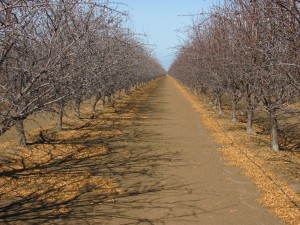 Observers are reporting a scattering of open flowers across the tops of advanced examples of the Sonora, Nonpareil and several California type varieties.

Observers are reporting a scattering of open flowers across the tops of advanced examples of the Sonora, Nonpareil and several California type varieties. The greatest amount of open bloom is found in the Sonora variety and the few remaining plantings containing the Neplus variety in the Kern County area, with observers in Madera and Fresno County reporting only trace amounts of open flowers.  As may be seen in the photos accompanying this report, orchards in the region retain their predominately dormant appearance and only a close examination reveals the fact that the bloom is about to begin.

Beekeepers could be found scurrying though the region’s orchards placing hives in the fields. Observers have noted that many hives are yet to be delivered and that growers are expecting deliveries over the weekend. This may be complicated by the wet conditions forecast for the next few days in orchards planted on the heaviest soils.

While the rainfall we have received is helpful and very much appreciated, it has not done much to alleviate the drought and prospects for the coming growing season. Observers are reporting that growers in the Central California Irrigation District are expecting 21 inches of water this year, while those in the Chowchilla and Madera Irrigations District are expecting no deliveries for the 2014 irrigation season.