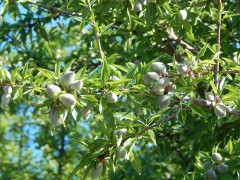 Drought update: how did California fare during 2015-2016 winter?

The following excerpts on the drought situation in California come from a recent article by Daniel Swain from WeatherWest.com posted April 21, 2016 The NAM suggests some substantial precipitation accumulations north of San Francisco but virtually nothing in SoCal over the next few days. (NCEP via tropicaltidbits.com)

With the formerly powerful El Niño event now fading in the tropical Pacific and most of California’s traditional rainy season now behind us, it’s a good time to consider the modest drought relief that occurred in California this past winter. First, the good news: the northern half of California fared pretty well precipitation wise, with virtually all of the state from the Bay Area northward experiencing near or above average season-to-date precipitation. The northernmost portion of the state–where much of California’s water storage infrastructure resides–did particularly well, with many areas seeing more than 130-150% of the long term average. Sierra Nevada snowpack was a bit of a mixed bag, ranging from near average in the north to significantly below average in the south (though still far above last year’s record-low levels virtually everywhere). Statewide, snowpack ended up below the long-term average and is now melting rapidly–largely due to warm mountain temperatures which (yet again) persisted through the winter. Many short-term drought indicators have improved considerably in response to this precipitation, and many of California’s major reservoirs are actually in better shape than they have been in years.

But while NorCal precipitation this winter was enough to stabilize the long-term accumulated precipitation deficit, it didn’t really even make a dent in the still tremendous multi-year shortfall that has developed since 2012.

Further south, this past winter was even more disappointing. Outside of a few brief (but intense) bouts of storminess, the storm track largely stayed north of Los Angeles–bringing yet another very dry winter to the southern third of the state.

April showers in NorCal on Friday; more widespread next week

A fairly typical April pattern will take hold over the next 10 days across California, with occasional bouts of light to moderate precipitation. Tomorrow’s system will be aimed primarily at NorCal (generally from the Bay Area northward), but could drop a respectable amount of rain and mountain snow over the northern portion of the state.  As is typical for the highly changeable conditions in spring, the medium range models suggest a continued potential for additional showery periods over the next 10 days or so.

I’ll start with the usual caveat that we’re still on the wrong side of the “Spring Predictability Barrier,” and that it’s hard to say anything with high confidence specifically regarding next winter at this early date. But at the moment, virtually all of the American and international dynamical models suggest a rather rapid transition toward La Niña conditions in the tropical Pacific Ocean by late summer, with cool tropical anomalies likely persisting or intensifying through the autumn.

What might this mean for California next winter? Well, La Niña in general is associated with an even wider range of outcomes than El Niño along the West Coast of North America. The strongest connection is to dry winters in Southern California (yes, yes, I know). Northern California has has historically experienced both very dry and very wet winters during La Niña, though the balance tips toward dry conditions on average. We’ll know more in a few months, but preliminary indications do not favor drought relief during the 2016-2017 winter in California.