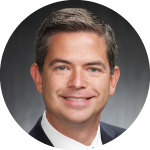 Mark Jansen was selected by the Blue Diamond Growers Board of Directors to become President and Chief Executive Officer in October 2010. With a unique understanding of the branded retail and food service business, Mark’s career achievements include leading the brand growth for Häagen-Dazs, Betty Crocker, Totino’s, Pillsbury, Red Baron, Freschetta, Wolfgang Puck, Tony’s and Minh.

Mark’s vision for Blue Diamond Growers is that it is a unique company that will grow to deliver the benefits of almonds to the world, while preserving the values that define its long-standing partnerships with its owner-growers, business partners and employees. The cooperative’s values—partnership, quality, innovation and integrity—shape daily decisions and actions.

Prior to joining Blue Diamond, Mark was president of Schwan’s Food Service in Marshall, Minnesota, where he led the profitable turnaround of the division. He also worked for the Pillsbury Company, Edison Brothers Stores, Inc. and General Mills, Inc. Mark received his MBA in Marketing and Finance from the Kellogg School of Business at Northwestern University in 1994.

Bill Morecraft’s tenure with Blue Diamond spans more than 25 years. Beginning with the company in 1986 as a Financial Analyst, Bill has also managed teams in Cost Accounting, Production Planning, Purchasing and Sales Planning. He was appointed General Manager of the Global Ingredients Division in 2008, a position he currently holds.

Utilizing his experience and knowledge of the almond industry, Bill has led the Global Ingredients Division to record growth in volume and revenue since being appointed to the General Manager position. Through Bill’s guidance and leadership, Blue Diamond proudly supplies many of the top consumer branded food companies in the world, shipping to more than 90 countries around the globe.

Bill has served on a number of committees for the Almond Board of California, helping to shape the Almond industry’s growth universally, an industry that is delivering record crops and driving record consumption. Internally, Bill has assembled a team that has further established Blue Diamond as the leading supplier of almonds and almond ingredients in the world.

Bill received his B.S. in Business Administration from California State University at Sacramento in 1981.