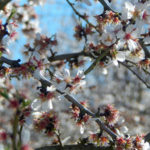 Nonpareil continued to be the leading variety, followed by Monterey, Butte, Carmel, and Padre.

Kern, Fresno, Stanislaus, Merced and Madera were the leading counties. These five counties had 73 percent of the total bearing acreage. To view the complete report click here…