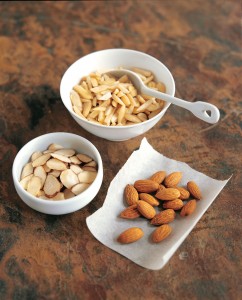 As Americans sit down to enjoy Thanksgiving dinner, they often wish their family and friends good health and a long life.  Good news! With nuts like almonds on the table, these sentiments are more than just a traditional toast.

Significant research published last week in the New England Journal of Medicineprovides a helpful illustration of factors that may contribute to a healthier, longer life – and it includes nuts like almonds.[1] It adds to the evidence supporting almonds’ role in promoting overall health, as several scientific studies published over the past two decades have shown that almonds provide health benefits that contribute to healthy weight management,[2] heart health[3],[4],[5] and diabetes symptom management.[6]

The newest study found that study participants who ate a handful (a one-ounce serving) of nuts daily were associated with a 20% lower risk of dying from cancer, heart disease, and other major causes of death compared to those who did not eat nuts.1 Researchers noted that while these findings are significant, the observed inverse association between nut consumption and mortality does not indicate cause and effect. This study, the largest ever conducted investigating the effects of eating nuts on mortality, involved nearly 119,000 health professional men and women who were tracked for roughly 30 years. Researchers reported that those who ate more nuts were also slimmer and tended to have a healthy lifestyle; they were less likely to smoke and more likely to exercise.

According to Dr. Karen Lapsley, Chief Scientific Officer for the Almond Board ofCalifornia, “This study adds to the current strong body of evidence which demonstrates that eating nuts daily, including almonds, confers health benefits and supports long-term health. Nuts deliver many good attributes in a small, satisfying package.”

While the NEJM study applies to all nuts, almonds are the tree nut highest in protein (6 grams), fiber (4 grams), calcium (75 grams), vitamin E (alpha-tocopherol), riboflavin and niacin (1 milligram) when compared ounce for ounce. Additionally, each one ounce serving of almonds has 13 grams of unsaturated fat and only 1 gram of saturated fat.

The NEJM study notes in the discussion section that the nutrients in nuts, such as unsaturated fatty acids, protein, fiber, vitamins, minerals and antioxidants, may confer heart-protective, anti-carcinogenic and anti-inflammatory properties.[1] The study also states that findings are based on self-reported data from questionnaires, and that the researchers lacked data on how nuts were prepared. For example, whether the nuts consumed were salted, roasted or raw. While this study found an association between nut consumption and mortality, a number of recent studies specifically back almonds as a nutritious addition to heart-healthy and weight conscious diets.

Earlier this year, a major clinical trial conducted in Spain reported that roughly 30% ofheart attacks, strokes and deaths from heart disease were reduced in study participants at high cardiac risk by switching to a Mediterranean diet rich in olive oil, nuts, beans, fish, fruits and vegetables.[7] The study participants, who were at increased risk for heart disease, followed either a Mediterranean diet or a low-fat diet for nearly five years. The Mediterranean diet included extra-virgin olive oil or mixed nuts including almonds – roughly one ounce per day. While the study results cannot be credited to just one nut, it illustrates how almonds can be a delicious addition to your heart-smart diet. Further research is needed to determine if the findings of this study can be generalized to the U.S. population and those at lower cardiac risk.

Just last month, a study published in the European Journal of Clinical Nutrition found that eating 1.5 ounces of dry-roasted, lightly salted almonds daily helped curb participants’ appetites and significantly improved vitamin E and monounsaturated (“good”) fat intake.[8] The 137 adult participants were at increased risk for Type II diabetes and were not given any other dietary instruction other than to follow their usual diet and exercise plan. After a month of snacking on 250 calories from almonds daily, participants did not gain weight. While the study was only four weeks in duration, it suggests snacking on almonds can be a weight-wise strategy.

Another study supporting almonds for a healthy weight was published last year.[9] Measuring digestibility, researchers found that we actually absorb about 20% fewer calories from whole almonds than stated on the nutrition facts panel, suggesting that because of their rigid cell structure, not all calories are available for absorption. Further research is needed to better understand how this technique for calculating calories could potentially affect the calorie count of other foods. But it is encouraging news for dieters who want a nutrient-dense snack for fewer calories.

Finally, an epidemiologic study led by researchers from Brigham and Women’s Hospital and Harvard Medical School found a 35% decreased risk of pancreatic cancer in over 75,000 female nurses who ate one ounce of nuts at least twice weekly compared to those that did not eat nuts at all.[10] Again, as this was an observational study, more research is needed to confirm the results.

Almonds, in all forms such as whole, sliced, slivered, flour, almond butter or almond milk, provide a unique flavor that make any holiday recipe delicious and now perhaps more meaningful to everyone who enjoys a handful of almonds every day.