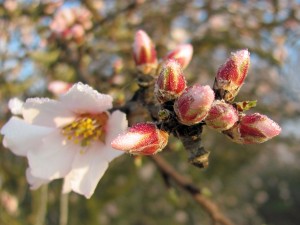 The pink tip stage of the Fritz almond variety.

The following excerpts on the drought situation in California come from a recent article by Daniel Swain from WeatherWest.com posted February 16, 2016.

February has thus far felt a lot more like July across a wide swath of California. Almost no precipitation of significance has fallen in California since the start of the calendar month, and record high temperatures have been set nearly every day in at least a few locations. The heat in Southern California has been truly sweltering: recent daily maximum temperatures exceeding 90F in the Los Angeles area have actually exceeded average summer temperatures on multiple occasions. Even in the Bay Area and Central Valley, temperatures have reached 80 degrees during the height of winter.

While a deep Gulf of Alaska low has persisted since January, increasingly persistent ridging has been present along the West Coast. (NCEP via ESRL)

The proximal cause of this record warmth and widespread mid-winter dry spell is (perhaps unsurprisingly) the development of a strong high pressure system roughly aligned with the West Coast of North America. This setup is a bit different than that which brought dry weather to Southern California but wet conditions to Northern California earlier this winter–since the more recent one has essentially re-directed the jet stream (and subsequently the storm track) well to the north of the state. This pattern may sound familiar to regular readers: it’s similar to the setup brought about by the Ridiculously Resilient Ridge, which set up shop over the far northeastern Pacific during recent California drought years and continued for many months at a stretch. One critically important difference is that this ridge has not yet been nearly as “resilient” as those during recent winters.

Season-to-date precipitation remains a patchwork of above and below-average across the northern 2/3 of CA with SoCal uniformly below avg. (WRCC)

Return to ridging in the medium term, but signs of more active pattern by end of February

There’s presently pretty good model ensemble agreement that warm and dry conditions will quickly return to all of California by the coming weekend following Wednesday’s precipitation, and persist for at least a week (although temperatures will probably not be as warm as recent record-breaking values). Looking out even further than that, though, there are still tantalizing signs of a potential shift to much wetter conditions by the very end of the month. The GFS and ECMWF ensembles have both been suggesting that the anomalously deep Gulf of Alaska low which has been present so far this winter will shift subtly eastward over the coming 2 weeks, eventually displacing the West Coast ridge far enough to the east to allow the “storm parade” which has been present across the North Pacific for the entire winter to reach California. There has also been a consistent wet signal in CFS seasonal forecasts for March, which would be in agreement with more recent GFS/ECMWF model trends. Therefore, I’d still say there’s a good chance that most or all of California will experience above-average precipitation going into March (although with each passing dry week it’s getting decidedly harder to make up the accumulated seasonal deficits in Southern California). Despite some recent claims to the contrary, there is still time for substantial drought relief this winter in California…but the clock is ticking.

More thoughts on the bigger picture

Finally, it’s worth noting that seasonal forecasts have consistently underestimated the magnitude of subtropical ridging over and southwest of California so far this winter. Despite the occurrence of one of the most powerful El Niño events on record, Southern California has remained very dry this winter (and Northern California, while wet until recently, is now starting to fall behind). As I discussed extensively in my previous post, there are some relatively subtle but critically important differences between the atmospheric response to the 2015-2016 El Niño and to other large 20th century ENSO events. 2015 was the warmest year on record globally by a huge margin, and the early part of 2016 has brought warmth that is arguably even more dramatic (particularly in the Arctic, where sea ice is currently at its record low extent for this time of year).

I’ll reiterate that it’s impossible to discern in real time–and especially within the confines of a blog post–exactly why California has been considerably drier than expectations during the present very strong El Niño event, and why West Coast ridging has been so prominent during recent winters. One thing that is clear is that warming temperatures have already increased the likelihood and severity of drought in California–irrespective of changes in precipitation patterns. While a strong finish to the 2016 rainy season would bring substantial and meaningful drought relief, the legacy of California’s extraordinary multi-year drought will almost certainly persist through the coming summer (which, indeed, echoes a familiar refrain from earlier in the autumn).  I’ll have much more to say on these subjects later this summer, and plan to have a series of blog posts devoted exclusively to that conversation. Stay tuned.