The following excerpts on the drought situation in California come from a recent article by Daniel Swain from WeatherWest.com posted September 19, 2015.

A very strange summer in California

2015 has brought some of the strangest California warm season weather conditions in recent memory. Extreme, record-breaking ocean warmth continues across the entire northeastern Pacific. A significant portion of this can be attributed to a combination of El Niño and more generalized (but even more extraordinary) warmth in North Pacific Ocean. Two major and extremely unusual warm season precipitation events–one in early July, associated with the remnants of Hurricane Dolores, and another more recently in early September associated with the remnants of Hurricane Linda–have already occurred in Southern California. Both have been associated with record-shattering summer precipitation and rare heavy thunderstorms in the Los Angeles and San Diego areas, along with significant out-of-season flooding (even at lower elevations). In some cases, monthly precipitation records have been approached or broken over the course of just 24 or 48 hours–which is pretty incredible from a climatological perspective. 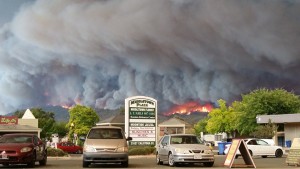 A massive pyrocumulus cloud associated with Valley Fire as the firestorm approached Middletown, CA on Sept. 12. (Photo by Michael Milirud)

Meanwhile, Northern California has had no such luck. Despite some light precipitation earlier this week, much of the northern half of the state has been left high and dry all summer. Several devastating and deadly wildfires–most recently including the Valley Fire, Butte Fire, and Rough Fire–have occurred in recent weeks. These wildfires have been remarkable not only for their outright intensity and high rate of spread but also because this extreme fire behavior has occurred in the absence of strong katabatic (offshore/downsloping) winds. Nearly all of California’s very fast spreading (and highly damaging) wildfires have historically occurred during dry Santa Ana or Diablo wind events (like, for example, the 2003 Cedar Fire in Southern California and the 1991 Oakland Hills Fire in the Bay Area). The truly extreme fire behavior exhibited this summer in NorCal in the absence of such winds strongly suggests that severely moisture-stressed vegetation and widespread tree mortality due to California’s record-breaking drought is fueling the flames. Unfortunately, the vegetation conditions conducive to this dangerous fire behavior will remain in place until “season-ending” precipitation occurs. That might not happen until November or even December in some spots, although we could get lucky with an early season storm. At present, though, there’s no such storm on the horizon in NorCal.

At the far southern end of California, though, things are looking very different than up north. After a bizarrely wet summer so far, additional record-breaking early-autumn precipitation may be on the way early this week.

An extremely moist airmass–originating from the deep subtropics–will surge northward over Southern California later on Sunday into Monday ahead of a broad upper-level low off the coast. As this low slowly moves toward shore, it will advect additional moisture from soon-to-be Tropical Storm Marty off the coast of Baja California. Broad-scale lift produced by a region of upper-level divergence ahead of the upper-level low will interact with this highly anomalous moist plume to produce widespread, possibly quite heavy precipitation across a wide swath of Southern California. Thunderstorms are also rather likely, and may present a major flash flood threat (especially in areas that already received heavy precipitation from Hurricane Linda’s remnants earlier this month). All in all, it’s looking increasingly likely that September 2015 could set some all-time monthly precipitation records in Southern California.

Unfortunately, none of this precipitation is likely to make it further north than about the San Luis Obispo County coast, meaning that wildfire-stricken parts of the state will not get any relief. It’s also worth noting that the risk of severe and dangerous flash flooding will be quite high this week across much of the Southwest–including those regions affected last week by some of the deadliest Southwestern flash floods in recent memory.

El Niño: still extremely impressive, and not done strengthening quite yet

The strongest El Niño event since at least 1997-1998 continues to intensify in the tropical Pacific. The latest oceanic Kelvin wave has finally reached the coast of

South America, and very rapid near-shore ocean warming has occurred over the past week. Nino 3.4 region sea surface temperature anomalies have now reached their highest August/September values ever recorded, and a new westerly wind burst appears to be ongoing in the West Pacific. All observational signs point to further strengthening of an event that is already in the top three since at least 1950. The present event is still expected to peak (in terms of maximum tropical ocean temperature anomalies) sometime between the late autumn and early winter months. Maximum effects upon California precipitation probably won’t occur until the January-March period, however, which is during the peak of our typical rainy season. Moreover, the September update of both the North American and International Multi-Model ensembles continues to suggests a high likelihood of a wet January-March period during the coming winter. Well above average temperatures are also expected to persist through most of the winter for most of California, which may have significant implications for lower-elevation snowpack.

It does not necessarily appear, however, that California will see an early start to the rainy season. Seasonal forecast models continue to suggest that November and perhaps early December will be drier and much warmer than average. This forecast has been fairly consistent in recent months, and suggests that our drought-worsened fire season may last for at least a couple more months in the north. One exception appears to be in the southern third of the state, which will have received three rounds of very impressive, drenching rains so far this summer by the end of the coming week. These intense tropical downpours are very likely linked to the extreme warmth of the Pacific Ocean near and south of the Southern California Bight, where water temperatures have recently approached an astonishing and record-breaking 80 degrees F! Fire risk in the far southern part of the state will still be greatly elevated during any Santa Ana wind events that develop, but recent and ongoing rains will partially mitigate the regional fire danger in the south.