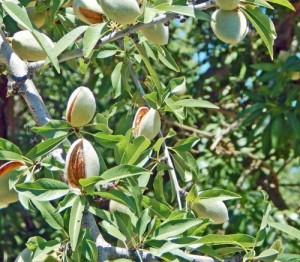 A Nonpareil planting in the Westley area of Stanislaus County.

The following excerpts on the drought situation in California come from a recent article by Daniel Swain from WeatherWest.com posted July 13, 2015.

Recent Weather Summary: A wet June/July in the Sierra Nevada

An unusually active summer weather pattern has continued across much of California over the past couple of weeks. Conditions have been particularly noteworthy in the Sierra Nevada, where widespread thunderstorms have brought an impressive array of torrential downpours, large and accumulating hail, and even (at the highest elevations in the Southern Sierra) a rare July snowfall. Most coastal and valley areas, on the other hand, have experienced less spectacular (but still unusual) cool, cloudy, and even showery conditions. The primary culprit: an unusually cool, deep, and slow-moving low pressure system off the California coast, which acted upon a preexisting moist (monsoonal) air mass. This low has since moved on to the east, and more seasonably dry and warm conditions have returned to California. Where recent mountain downpours did occur, wildfire risk in tinder-dry drought-stricken forests has been notably (if locally and temporarily) reduced, though it won’t take long for vegetation to dry out again.

The CFS has been hinting at an unusually active summer for a couple of months now, and those early predictions may be realized. It now appears that there will be at least two opportunities for active weather across large portions of California over the next 10-12 days. Later during the coming week, deep southeasterly flow will develop over at least the southern half of California. This kind of pattern is a classic summer monsoonal setup, with the potential for a couple of easterly waves to propagate into Southern California from the Desert Southwest. Models also suggest that a weak upper-level low or trough may develop off of the NorCal coast as well, which would allow subtropical moisture to advect northward over much of California.

At the same time, soon-to-be Hurricane Dolores will slowly move to the west-northwest off the coast of Baja California. There is still considerable uncertainty regarding the ultimate track of Dolores, and if the system takes a more westward trajectory, there will likely be few (in any) impacts in California. If, however, the system takes a more northerly trajectory–as recent runs of the GFS and ECMWF models suggest–prevailing southerly flow around the low off of NorCal may draw a considerable amount of remnant moisture and energy from then-former-hurricane Dolores over the state.

Both of these features together have the potential to produce a prolonged period of mountain and desert thunderstorms. There may eventually be a notable potential for showers and thunderstorms in coastal/valley regions, possibly including (at some point) all of the major metro areas in the state (San Diego, Los Angeles, San Francisco, and Sacramento). It’s worth noting that the remnants of decaying East Pacific hurricanes do occasionally bring warm season precipitation in California–especially during major El Niño years. The likelihood of this kind of scenario unfolding is much higher than usual this summer due to widespread record-warm ocean temperatures throughout the northeastern Pacific Ocean, and Dolores probably won’t be the last tropical system to potentially affect California before hurricane season ends in late autumn.

El Niño has been making headlines in the weather and climate community for the better part of two years now. Early forecasts from winter/spring 2014 hinted that a major event might take shape during summer 2014–but, as regular readers of this blog are acutely aware, those initial projections failed to come to fruition. A weak “El Niño-ish” event instead developed and persisted through late winter 2015. The atmosphere failed to respond to the unusually warm ocean conditions in the way we typically observe during canonical El Niño events, and global impacts did not resemble those usually associated with El Niño (though global temperatures were still the warmest on record in 2014).

Starting earlier this calendar year–during late winter and early spring 2015–a series of westerly wind bursts (WWBs) developed in the tropical West Pacific Ocean, allowing much of the extremely warm water that has accumulated over the past two decades of persistent “La Niña-like” conditions to “slosh” back eastward. Several large oceanic Kelvin waves generated in response to these westerly wind bursts propagated across the entire Pacific basin, inhibiting  upwelling off the west coast of South America and allowing ocean temperatures near the Peruvian coast to rise dramatically. For a while, early 2015 looked a lot like early 2014: the atmospheric precursors to a major El Niño event were in place, and the ocean was beginning to respond. But unlike 2014, the ocean was already in a weak El Niño state in early 2015–and the early WWBs acted to reinforce the already anomalous state of the tropical Pacific Ocean.

Since the early spring, 2014 and 2015 have diverged even more dramatically from and oceanic and atmospheric perspective. Powerful westerly wind bursts–including at least one which may have been the strongest on record for this time of year–have continued during summer 2015, and have recently extended eastward nearly all the way across the Pacific Basin. The most recent of these has generated another very strong Kelvin wave, which is now making its way eastward (and will arrive at the South American coast later this summer).

Meanwhile, an extraordinary (and apparently record-breaking) string of tropical cyclones has developed in the central and western Pacific Ocean. Easterly trade winds have dramatically weakened across the tropical Pacific–in some spots even reversing entirely–and as a result impressive ocean surface warming has occurred in the central and eastern tropical Pacific over the past 2-3 months. Ocean temperatures in some spots are now higher than during any previous July on record (even including the powerful El Niño years of 1982-1983 and 1997-1998). Finally, relative sea surface temperatures have recently started falling in the far western Pacific near Indonesia–a hallmark of a well-defined, powerful, and maturing El Niño event.

All of this is to say: from an observational perspective, the current El Niño event is going full-steam ahead. The Multivariate ENSO index–which measures the overall strength of an El Niño event by taking into account a variety of atmospheric and oceanic indicators–just hit its highest value since the 1997-1998 El Niño (and is still rising). Therefore, by at least some metrics, strong El Niño conditions already exist in the tropical Pacific Ocean as of July 2015.

And this El Niño is not done strengthening yet. Essentially all dynamical models available suggest that the current event will continue to intensify through the summer and autumn months, not peaking until some time between November and February. In fact, the flagship American and European models (the CFS and ECMWF, respectively) continue to hint at the possibility that this event could eventually become the strongest on record. That’s a pretty tall order–given the enormous magnitude of the events which occurred in 1982-1983 and 1997-1998. On the other hand, model projections have become increasingly eyebrow-raising at the same time of year when our confidence in their reliability increases dramatically, so it would be unwise to discount them outright. Generally speaking, healthy skepticism is warranted when complex dynamical models make predictions that involve totally unprecedented extreme events. But 2015 has already been a year of record-breaking meteorological extremes across vast swaths of the Northern Hemisphere, and considerable evidence suggests that there will be more to come. At this point, it seems quite likely that very strong El Niño conditions will be in place by late autumn 2015, and there is some risk that the present event could eclipse even the extreme events of 1982-1983 and 1997-1998.

Well-developed El Niño conditions already exist in the tropical Pacific Ocean, and observational/model evidence suggests that the current event may become one of the strongest on record by late autumn.

I’ve already written extensively about the potential impacts of a strong El Niño in California. The most noticeable effect is to increase the risk of heavy precipitation during the winter rainy season, though the signal is most consistent for the strongest events and in the southern half of the state. But it’s critically important to remember that even a large increase in the likelihood of a wet winter does not eliminate the possibility of another dry one.

This is particularly true regarding the current event due to the unusual–and in many ways unprecedented–configuration of Northern Hemisphere ocean temperatures. The much-discussed “Blob” of warm water in the far northeastern Pacific has made a comeback in recent months as an incredibly persistent blocking high pressure system set up over the Pacific Northwest and western Canada (sound familiar?). In fact, highly anomalous warm water now extends continuously from the south coast of Alaska to the west coast of Peru (!). This is a truly enormous expanse of very warm ocean–spanning thousands of miles–and represents a staggering amount of extra energy in the atmosphere-ocean system. It’s possible that these record-warm ocean temperatures could add a considerable amount of water vapor to the atmosphere this coming winter–even more than has been the case with previous strong El Niño events, since these warm waters extend well outside of the canonical tropical warm zones.

But water vapor doesn’t tell the whole story, either, since we still need to experience winter storm systems to act on all that extra moisture. El Niño tends to strengthen the subtropical jet stream and low-latitude storm track, which is the primary mechanism by which California sees extra precipitation during such years. The strength of the jet stream depends on the magnitude and spatial orientation of atmospheric temperature variations, which themselves are dependent on spatial variations in ocean temperatures. Since the entire North Pacific basin is anomalously warm at the moment, it’s possible that the strong subtropical ocean (and atmosphere) temperature gradients that usually exist during El Niño may not develop as they normally would, which could interfere with the subtropical jet stream enhancement. The magnitude of the expected event is sufficiently large that very strong tropical warming will most likely be able to overwhelm the high-latitude ocean warmth, but at this point that’s just an educated guess–no one knows for sure. One piece of good news on this front is that the persistent tropical Pacific warm pool which is thought to have played a leading role in the generation and maintenance of the Ridiculously Resilient Ridge over the past several winters is rapidly fading as El Niño strengthens. While there are plausible hypotheses regarding other contributors to the Triple-R’s persistence–including the effects of melting ice and snow in the Arctic and the role of regional ocean temperature variations–the overall Pacific SST configuration this coming winter has probably changed enough from the past several winters to prevent a recurrence of the Ridge (at least in its recent, unrelenting form).

Overall summary: a very strong El Niño event in the tropical Pacific is now highly likely, and although the likelihood of a wetter-than-average winter in California is increasing, considerable uncertainty remains due to a highly unusual temperature configuration elsewhere in the Pacific.

No matter what, it’s going to be a very interesting winter ahead. Stay tuned.